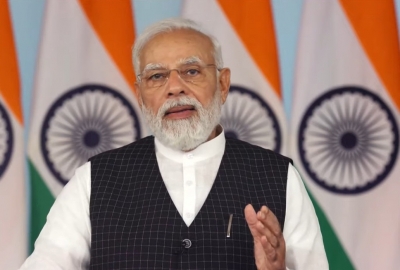 Chennai, May 24 (Ajit Weekly News) The Viduthalai Chiruthaigal Katchi (VCK) has announced that it would hold protest marches against Prime Minister Narendra Modi during his Chennai visit on May 26.

The protest, according to the VCK, is against “the policies of the Central government that caused economic hardship and social disturbances to the people of the country”.

Left parties will also join in the protest march with the VCK against the Prime Minister.

VCK leader and Member of Parliament Thol Thirumavalavan in a statement on Monday said that the VCK would be part of the nationwide protest being carried out by the Left parties against the Central government’s “anti- people” policies.

Thirumavalavan said that the Left parties, CPI-M, CPI, VCK, and CPI-ML will jointly conduct protest marches and would distribute pamphlets against the “anti-people” policies of the Central government.

The VCK leader said that while the Union Government has increased fuel prices by 18 times, it reduced the price only twice, and that strong resistance was required against the policies of the Modi government.