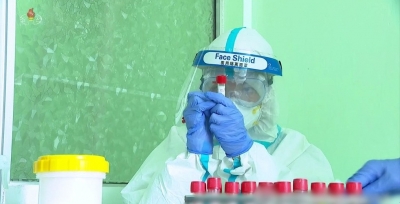 The daily number of fever cases has remained below 200,000 for the third consecutive day after reaching 219,030 cases on May 21, Yonhap News Agency quoted the KCNA report as saying.

The death toll remains at 68, with the fatality rate standing at 0.002 per cent, the KCNA said.

The KCNA stressed that the North has succeeded in effectively keeping the virus situation under control.

On May 12, North Korea reported its first Covid-19 case after claiming to be coronavirus-free for over two years and declared the implementation of the “maximum emergency” virus control system.

The North continues to remain unresponsive to South Korea’s offer for Covid-19 assistance.