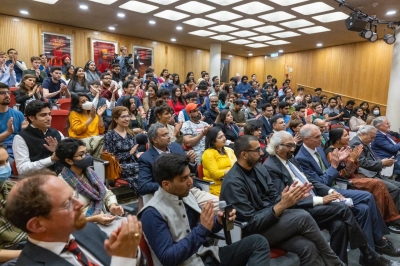 The question and answer session to mark ‘India at 75’ was hosted by Assistant Professor of Indian History at Cambridge and Director of Studies at the university’s Corpus Christi College, Dr Shruti Kapila.

After a long pause during which he was visibly moved by the subject, he finally replied: "I think the word that comes to mind is forgiveness. It’s not precisely the most accurate." He then added: "The single biggest learning experience of my life was my father’s death."

Thereafter, an Indian academic dealing with public policy challenged Gandhi’s reiteration of what is inscribed in the Indian Constitution that ‘India, that is Bharat, shall be a Union of States’ by saying it also describes the country as a ‘nation’ and one which had a ‘composite culture’. Gandhi disagreed. He said: "The word nation is a western concept." He continued by stressing the union of states definition "goes to the heart of Indianness".

In a veiled reference to treatment of Muslims, Dalits and Other Backward Castes (OBCs), but especially the first mentioned, in India, he stated one cannot "isolate 200 million people". He called it "unfair".

The meeting at the McCrum Lecture Theatre meant for the members of the university and special invitees only was packed with students, scholars and professors. Dozens waiting outside the hall were turned away because registration was on a first come first served basis.

Later, Professor Pippa Rogerson, Master of Gonville and Caius College at the University of Cambridge, founded in 1348, hosted a private dinner in honour of Rahul Gandhi. The meal took place in the distinguished dining room of the College’s ancient Master’s Lodge.

Among the eminent attendees were Sir Christopher Clark, Regius Professor of History at Cambridge, and Professor Brendan Simms, Director of the Centre for Geopolitics. Also present was a great-granddaughter of India’s second President Dr Sarvepalli Radhakrishnan, who was previously Professor at the University of Oxford on Religion, Philosophy and Ethics. His lectures and writings significantly shaped international understanding of Hinduism.