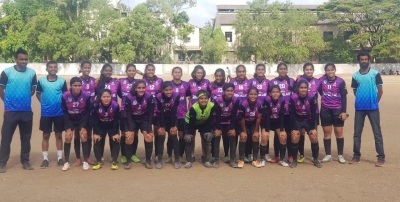 A major takeaway from the partnership is an opportunity for promising Aspire FC players to train at the GKFC Academy in Kerala. Similarly, a cross-exchange of coaching ideologies and understanding the hands-down pathway to move on is another add-on for Aspire.

In addition to the above, Aspire FC will sport the GKFC logo, and engage in brand cross-promotion on each other’s social media platforms, Aspire FC informed in a release on Monday.

Aspire FC’s first assignment will be the Pune District Football Association (PDFA) Women’s League scheduled in the last week of May 2022.

Dr. Ashok Kumar, CEO of Gokulam Kerala FC said, “We at Gokulam support women’s football and encourage as much as we can as part of our philosophy of equality. When Aspire F.C reached out to us, we realised through a series of talks that their focus was very much in-line with our own Academy, wherein players seek guidance, look at vision beyond, opportunities and inspiration.”

“As a young team, we felt Aspire FC, whose average age is around 18 years, deserves the push and align with our philosophy which is purely development, and hence in our own little way this partnership fructified. We have stitched together a bond and can say have kick-started an association that will grow for sure.”

Srikant Iyer, secretary, Aspire FC and co-founder of Aspire India said, “The tie-up will help our players follow a pathway. That of graduating from youth to senior level football via the vehicle in the all-professional GKFC set-up. It’s a learning curve and how best to learn than from GKFC, who are undoubtedly the flag bearers of Indian women’s football in Asia. And to have them associated with us triggers encouragement. We thank GKFC for their wholehearted support in considering our request.”

Aspire FC, recently, had five of its players represent Pune District in the Under-17 District Girls Championship at Nashik, where Pune finished runners-up.