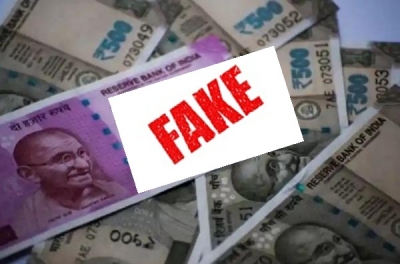 New Delhi, May 24 (Ajit Weekly News) The Crime Branch of Delhi Police has unearthed a factory in Ghaziabad where Fake Indian Currency Notes (FICN) were being printed and arrested three people in this connection, an official said on Tuesday.

Accordingly, a strategy was chalked out to bust this racket.

On May 19, a tip-off was received that one person named Ashish will come near 1st Pushta, New Usmanpur to supply Counterfeit Currency.

Subsequently, a police team was constituted which laid a trap and apprehended the accused counterfeiter. On his cursory search, FICN worth Rs 1.5 lakh was recovered.

On the instance of accused Ashish, his associate Rajpal was apprehended and on his instance FICN of Rs 3.13 lakh, 50 Uncut printed FICN sheet (30 sheet from office & 20 sheets from i10 Car, containing print of 15 FICN on each sheet) total worth FICN of Rs 3.75 lakh, one Scanner, three CPU used in developing/processing the FICN recovered from his office located at Tronica City, Ghaziabad.

The third accused Azeem was apprehended from his factory located at Tronica City.

Apart from that 40 boxes of ink used in Printing of FICN also recovered, the police said.

The accused persons were using a dye and offset Printing machine to print the CounterfeitNotes by using specialised ink and tools.

After printing the fake notes, the above accused used to give 3 fake notes in lieu of 1 real note to target customers.