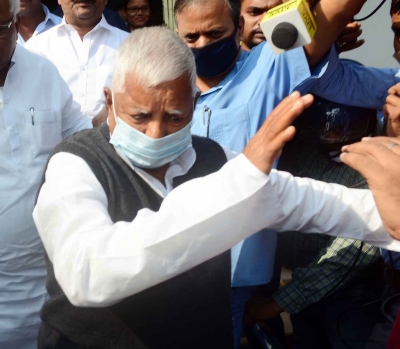 Patna, May 24 (IAN) RJD national president Lalu Prasad is expected to arrive here on Tuesday to announce the Rajya Sabha candidates in the evening.

He is currently at the residence of his eldest daughter Misa Bharti in New Delhi. Besides him, Misa Bharti and Tejashwi Yadav are also expected to arrive with him.

The nomination for the five seats of Rajya Sabha coming under Bihar begins Tuesday. It is expected that two seats can go to the Rashtriya Janata Dal (RJD), two to the BJP and one seat to JD(U).

The arrival of Lalu Prasad has significance in the context of the recent political developments. Nitish Kumar and RJD leader Tejashwi Yadav have come close in the last one month or so and the relations between Nitish Kumar and the BJP don’t seem to be so warm.

Nitish Kumar on Monday reportedly directed all the MLAs of his party to avoid leaving Patna for 72 hours. He has also announced an all-party meeting on May 27 to discuss the caste-based census issue.

The caste-based census is one of the issues in Bihar where Nitish Kumar has differences with the BJP, and may provide the necessary ‘opportunity’ for him to leave the BJP and form the government with the RJD.

Keeping this in view, the BJP which is against the caste-based census, held an emergency meeting on Monday evening and decided to support the issue.

Hari Bhushan Thakur Bachaul, a BJP MLA said: “When our Prime Minister said that the states are independent to conduct caste-based census on their own expenses, where is the doubt. The opposition are confusing the people that the BJP is against the caste-based census.

Meanwhile, RJD senior leader and MLA Bhai Virendra said: “Any political party supports or not, the RJD will give full support to Nitish Kumar for the caste-based census.

RJD vice president Shivanand Tiwari also said that “whatever Nitish Kumar is doing is appreciable. The RJD will give complete support to Nitish Kumar and his party”.