8 killed in road accident in K'taka 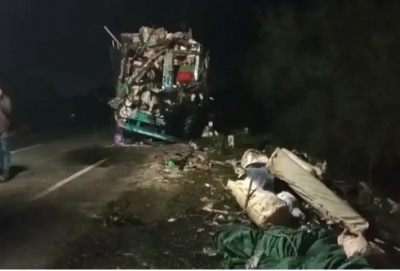 Hubballi (Karnataka), May 24 (Ajit Weekly News) At least eight people were killed and 25 others injured in a collision involving a lorry and private bus in Karnataka’s Hubballi-Dharwad district in the early hours of Tuesday.

The mishap occurred at 12.45 a.m. on the outskirts of Hubballi near Tarihal on the Pune-Bengaluru National Highway. According to police, the tragedy occurred on the bypass when the truck carrying rice bags and a private bus collided head on.

As a result, six people travelling by bus died on the spot and two succumbed to injuries at the hospital. Authorities have stated that the death toll might increase as many among the injured are critical. A total of 25 passengers, who suffered injuries, have been admitted to the KIMS hospital of Hubballi. The identities of the deceased persons is yet to be ascertained.

Police said that most of the deceased persons were travelling to Bengaluru from Kolhapur of Maharashtra. Hubballi-Dharwad Commissioner Labhu Ram visited the spot. Hubballi North Traffic police have taken up the investigation.