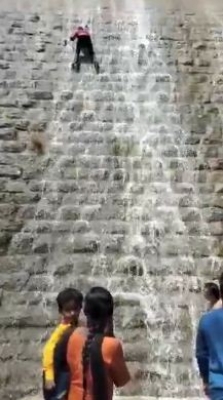 Bengaluru, May 23 (Ajit Weekly News) A youth, who tried to indulge in adventure by trying to climb a dam face in Karnataka’s Chikkaballapur, fell after ascending just 30 feet, as per a video going viral on social media on Monday, and was seriously injured.

The incident had taken place at the Srinivasa Sagar dam located near Chikkaballapur city recently.

In the video, the youth is seen climbing the dam even as water is overflowing from it. He had climbed up 30 feet amid cheers from his friends, but then suddenly lost his balance and fell off, shocking everyone. The video shows the youth collapsing after the fall.

He had been shifted to hospital and his condition is said to be serious.

Tourists are flocking the Srinivasa Sagar dam which is overflowing following incessant rains.

Police have registered the case in this regard, and district authorities have tightened security at the spot.