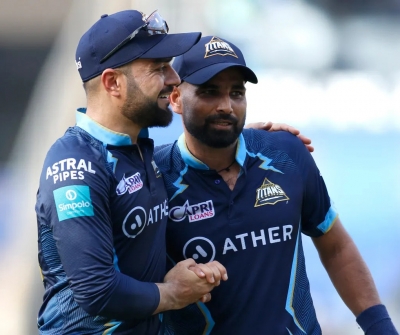 Kolkata, May 23 (Ajit Weekly News) Gujarat Titans’ left-arm spinner Sai Kishore has said that bowling in tandem with Rashid Khan makes his job of taking wickets easier, and added that he tries to “pick up something from each IPL game” to try and get better.

Gujarat Titans, who will take on Rajasthan Royals at the Eden Gardens here on Tuesday in Qualifier 1, have the services of one of the best spinners in the world in Rashid Khan and batters heave a sigh of relief when he completes his over. But Kishore says rival batters are misled into thinking that they can take advantage of his bowling immediately after Rashid has completed his over, and fall prey to his bowling.

Kishore began his IPL career with Chennai Super Kings but never got the opportunity to play for the franchise before he was snared by the Titans in the mega auction this year. While the 25-year-old has got limited opportunities, Kishore has made a mark in the three games he has played so far this season, taking three wickets in three games, with a best of 2/7 and a superb economy of 5.80 in the 10 overs he has bowled.

Asked if he enjoyed bowling with the illustrious Afghanistan spinner, Kishore said, “Definitely. Because when people find it hard to go after Rashid, they’ll go after me, which is nice. When we both bowl together, they want to go after someone else, so it makes the job (of taking wickets) easier. And when you have five bowlers who can do that, obviously it’s going to… he (Rashid) might get hit some days but most days it’s going to be under control.”

On whether he has picked up some of the bowling tricks from Rashid, Kishore said that his bowling is modelled on different lines, adding that the Afghanistan cricketer was someone who was at the top of his game and could “bowl with pace and deviate the ball both sides”.

“Rashid is someone who can bowl with pace and deviate the ball both sides. That’s Rashid’s game. It’s a game that’s so hard to get — but once you get that game, you don’t have to do much. Just have to bowl that length.

“My game is about game awareness, speed variations, changing the releases, changing the angles, being smart, reading the batters. So for my game, more than the skill, it’s all in the head for me. That’s the beauty of cricket, different skillsets. Like some batsmen can sweep, some can’t. Some are good down the ground; some are good with the pull. I see it that way. I’m very comfortable in my game and confident in my own skillsets.

He showered praise on Rashid, saying that the bowler was “one of the great competitors”.

“The overall game sense that Rashid brings to the table, I think he has been one of the great competitors that I’ve seen. Just wants the tough overs, wants to do that for the team. That competitive intensity is very nice to have. Two bowlers bowling in tandem, it’s very good to see. If two people can show up like that, it’s going to be very hard for the batters.”