Uma Bharati: Ayodhya, Kashi, Mathura a matter of faith for Hindus, like Mecca-Medina is for Muslims (Ajit Weekly News interview) 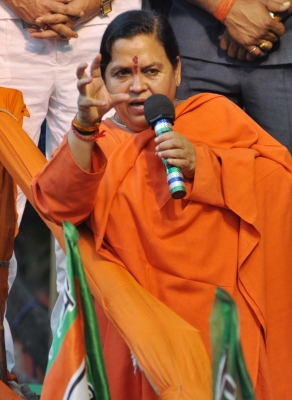 By Praveen Dwivedi
Bhopal, May 23 (Ajit Weekly News) There is no fight for Kashi and Mathura because a fight is when there is equal share between two sides. These places (Ayodhya, Mathura and Kashi) are the centre stage for millions of Hindus’ faith, like Makka-Madina for Muslims and the Vatican City for Christians, said former Madhya Pradesh Chief Minister Uma Bharti in an exclusive interview with Ajit Weekly News.

Bharti, who was among the BJP leaders who led the Ram Janmabhoomi movement of the 1990s in Ayodhya (Uttar Pradesh) and never hesitated in claiming that she was one of those who carried out the demolition of the Babri Masjid, spoke with Ajit Weekly News on the ongoing controversy over Varanasi’s Gyanvapi Masjid and some similar issues which have erupted in Madhya Pradesh too.

Bharti said like in Ayodhya’s Ram Janmabhoomi issue in the 1990s, she has a direct involvement with Kashi’s Gyanvapi. “I was in Parliament in 1991 and had mentioned not to leave Kashi and Mathura unresolved, it’s all on record, so luckily I am associated with the Gyanvapi issue also,” she said.

Bharti asserted that there has always been an expectation of liberalism from Hindus despite the fact their (Hindus) places of worship were destroyed. “I accept that goodwill is a need of the society, but it will be possible only when both sides will have the same thought. On one side Hindus’ places of worship are destroyed and on the other side you expect liberalism from Hindus. How can it be possible,” she added.

She said Ayodhya, Mathura and Kashi have never been important shrines for Muslims like Makka-Madina or some others, they were just ordinary places for them to pray. But for Hindus, these places were always the centre stage of their belief. “It is their wrong (Muslim) tenacity to make claim on these places. It is a well planned process to blame the Hindu community for creating animosity in society. These issues should be resolved to maintain the goodwill in the society,” she added.

When asked that a similar controversy has erupted in Madhya Pradesh after some Hindu unions questioned Bhopal’s Jama Masjid and demanded a survey of Dhara’s Bhojshala, Bharti said, “There is no controversy in Dhara’s Bhojshala. It has two parts. On one side, Hindus perform puja on the premises every Tuesday, while Muslims offer namaz in the complex on Fridays. There is only conflict of arrangement when Vagdevi (Saraswati) puja and namaz time come together.”

She stated that the idol of Goddess Saraswati will be brought from the museum in London and re-established within the Bhojshala complex. “Idgah is situated outside and Hindus pray for Goddess Saraswati’s place inside the Bhojshala premises. If they (Muslims) make any kind of claim on it, they are wrong,” she said.

“I am not commenting on any individual’s claim or any survey but it is a fact that Nandi Baba is looking toward there (mosque side) only and I don’t think I should explain why Nandi’s statue is present at the gate of each Shiva temple. I believe that today’s Muslim youth is educated and they understand that social and cultural unity is needed in society. Today’s educated Muslim youth also understand that religious faith is very personal.”