There is little 'apolitical' in breakaway BKU group 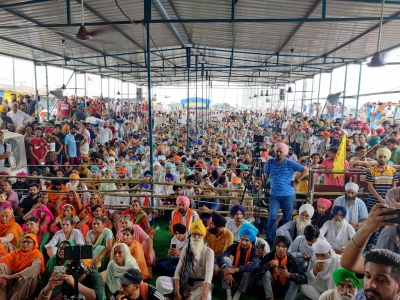 Lucknow, May 23 (Ajit Weekly News) It is called Bhartiya Kisan Union (Apolitical), but if reports are to be believed, there is a lot of politics in this ‘apolitical’ outfit.

The breakaway outfit of the BKU, led by Rajesh Chauhan, has alleged that the outfit under the Tikait brothers was getting ‘increasingly political’ and the members, including senior leaders, did not appreciate this.

BKU president Naresh Tikait claims that the split in the outfit was engineered by the BJP government and said that the parting of ‘some’ leaders will not impact the organization or its activities.

Fissures within the Bhartiya Kisan Union (BKU) had come out, ironically, on the death anniversary of its founder president Mahendra Singh Tikait on May 15, when the formation of a separate outfit was announced.

BKU vice-president Rajesh Chauhan said he took the decision after being “insulted” and alleged that the outfit sided with political parties in the elections – an apparent reference to UP assembly polls.

Naresh Tikait alleged that the new organisation was formed at the behest of the BJP government. “The organisation is an outfit of the government. The BJP wanted to damage the movement after the year-long farmers’ agitation. The agitations by the BKU are run by people as a group and individuals do not matter,” he said.

The split in the BKU, however, has put a question mark on the farmers’ posture towards the government and it remains to be seen whether the Tikait brothers will command the same pull that they did during the year-long agitation.

The Tikait brothers have been almost synonymous with farmers’ issues and this is the first time that their leadership has been challenged.

The new president of the breakaway outfit, Rajesh Singh Chauhan, who has replaced Naresh Tikait as the new BKU (Apolitical) chief, however, said, “A lot of hard work had been put into creating the unified Bhartiya Kisan Union, which was built to safeguard the interests of the farmers. However, the organisation under the Tikaits was moving into a ‘political zone’.”

Chauhan said, “Baba Tikait (Mahendra Singh) clearly stated that the BKU would neither join hands with political parties nor issue any statement supporting any political outfit during elections. The Tikait brothers, Naresh and Rakesh, were treading the path of their father till the farmer’s movement at the Delhi border but things changed gradually when the UP assembly elections were announced. Naresh Tikait openly issued a statement in favour of the SP-RLD (Rashtriya Lok Dal) alliance though later he retracted.”

The leader also accused the Tikait brothers of taking decisions without consulting any senior leader of the outfit. “We were not ready to see the downfall of the outfit being caused by the whims of Naresh and Rakesh. Hence, we were forced to part ways and formed the real BKU whose only job is to raise issues concerning farmers and fight for their welfare,” Chauhan added.

Chauhan, who belongs to Sithura village in Fatehpur district, joined the BKU in 1990 and rose to become its national vice president.

His younger brother Bhupendra Singh is a Samajwadi Party (SP) leader in Fatehpur and his sister-in-law Beena was elected the head of a block with the SP’s backing in 2017.