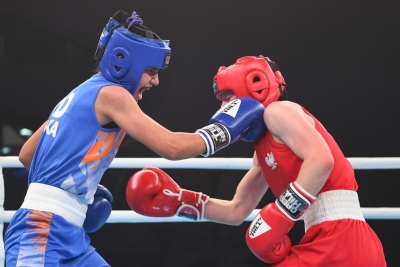 Bellary (Karnataka), May 23 (Ajit Weekly News) V Gunasri along with four other girls from Tamil Nadu stormed into the quarterfinals of the 2022 Sub-Junior Boys and Girls National Boxing Championships at the Inspire Institute of Sports here on Monday.

Gunasri notched up a close 3-2 win in a thrilling 46kg last-16 match against Punjab’s Simranjeet Kaur while N Keerthi Joshiya produced a contrasting display to complete an easy 5-0 win against another boxer from Punjab, Shukman Deep Kaur in the 44kg category.

M Sai Abi (34kg) and M Roshni (38kg) defeated their rivals from Arunachal Pradesh-Gida Janam and Parbati, by 5-0 and RSC R2 verdict respectively in the pre-quarterfinals.

SM Charmi (63kg) was the other Tamil Nadu boxer who also progressed into the Last-8 stage after outperforming Goa’s Vasnavi by 5-0.

Maharashtra and Punjab also had a great outing with their four boxers each progressing in the quarter-finals. For Maharashtra, Suhani Borade (46kg), Bhakti Cungade (63kg), Navya Naveli (52kg) and Samiksha Solanki (40kg) pulled off dominating wins while Shivani Toor (63kg), Mushkaan (54kg), Ragni Mattu (34kg) and Palak (38kg) were the Punjab boxers who made progress into the Last-8 stage with equally impressive victories.

Suhani, Navya and Samiksha clinched victories by unanimous decision against their respective opponents Himachal Pradesh’s Rohani Rana, Assam’s Hongali Basumatary and Delhi’s Ritu Kumari while Bhakti’s clean attack saw referee stopping the contest in the opening round itself before giving result in her favour against Himachal Pradesh’s Riya Sharma.

Palak and Shivani led Punjab’s dominance as they thrashed their opponents from Andhra Pradesh, Anushka Nela Palli and Buela Pragna Rani respectively by RSC verdict. Mushkaan, too, put up an attacking show to secure a commanding win by a similar margin against Rajasthan’s Gyatri Sharma while Ragni completed a comfortable 5-0 win over Himachal Pradesh’s Vanshika Thakur to make her way into the quarterfinals.

The on-going championship has been witnessing participation of 621 boxers, including 348 in the boys’ section, from 31 teams across the country. Each bout consists of three rounds of two minutes each with a minute’s break between each round.