Spanish GP: Finishing 5th gives me hope that at some stage we'll be fighting for win, says Hamilton 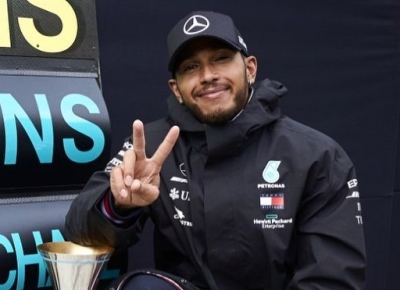 Barcelona, May 23 (Ajit Weekly News) The seven-time champion Lewis Hamilton, who has struggled with his car in the opening five races, said that he has revitalised his racing season with an “amazing” comeback drive at the Spanish Grand Prix here on Sunday.

Hamilton impressively fought back, after a puncture on the first lap saw him drop to 19th, to finish fifth in the Spanish Grand Prix. The Mercedes driver, who was one of the fastest drivers on track on his way back to contention, felt that finishing at 5th is better than a win.

“Without my start, I would have been fighting the two Red Bulls. That gives me great hope that at some stage we’ll be fighting for the win,” he said.

“The race pace is much, much better…the car is much nicer in the race. This is a great sign we’re going in the right direction. Just really unfortunate at the start to have got the puncture that we got in the Magnussen contact. But I didn’t give up, because that’s what we do,” he said.

“If I hadn’t had that issue at the beginning, who knows where we would have been in the end. But it’s great to know that we had a similar pace to some of the frontrunners,” he added.

Magnussen was challenging Hamilton around the outside of Turn 4 on Lap 1 of the race when the pair touched, the Haas skipping into the gravel as Hamilton suffered a puncture. Having crawled back to the pits, Hamilton then looked set for a long afternoon after rejoining in P19, at one point imploring his Mercedes team to retire him and save his engine.

Against the odds, Hamilton was actually looking on course for P4 in the closing stages of the race, having pulled off late moves on former teammate Valtteri Bottas and the Ferrari of Carlos Sainz. But an instruction to manage a “DNF risk” – later revealed to be a water leak – by lifting and coasting saw Hamilton concede the position to Sainz with two laps to go, leaving the Mercedes driver ‘gutted’.

“It was a lot hotter than predicted today, so for everyone, it was quite tough with these cars,” said Hamilton.