Pakistan mulls reduced working days in a week to save fuel 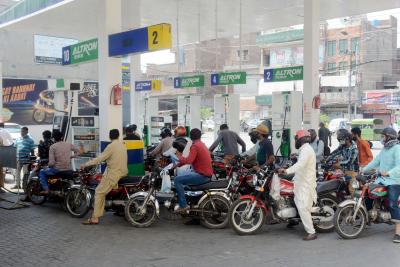 Islamabad, May 23 (Ajit Weekly News) Amid rising oil consumption and import bill owing to higher international prices, the Pakistan government is mulling the possibility of fuel conservation through reduced working days a week, hoping to save an estimated annual foreign exchange of up to $2.7 billion.

The estimates are based on three different scenarios in terms of working days and fuel conservation prepared by the State Bank of Pakistan for foreign exchange savings of $1.5 billion to $2.7 billion, Dawn news reported.

Pakistan’s total oil import during the first 10 months (July-April) of the current fiscal year (FY22) has gone beyond $17 billion, showing a massive 96 per cent growth compared to the same period last fiscal year. This includes import of petroleum products worth $8.5 billion and petroleum crude of $4.2 billion, showing 121 per cent and 75 per cent surge, respectively.

A senior government official said the relevant authorities from the power and petroleum divisions had been advised to come up with their estimates also including electricity conservation to take up the matter in a holistic manner with cost benefit analysis of various sectors before reaching a conclusion.

He said the central bank’s estimation mostly covered POL (petroleum products) consumption in normal working days a week, including retail business and government offices and educational institutions, which in any case would be on summer holidays. It did not take into account LNG imports which mostly go into the power sector, reports Dawn news.

These estimates suggest that additional petroleum products POL consumption for one more working day a week would cost the nation about $642 million in terms of commuting, which do not include freight and transportation. Conversely, reduced consumption with one less working day a week provides an annual saving of about $2.1 billion.

In the first case based on four working days and three holidays in which retail is open like a weekend, the average POL saving is estimated at $122 million a month or $1.5 billion a year.

Ninety-per cent of oil consumption is assumed for working days and the remaining 10 per cent for holiday in a month, Dawn reported.

In the second case based on four working days, two holidays and one day of lockdown (retail to remain closed for one day), the saving in the shape of reduced oil import is estimated at $175 million a month or $2.1 billion a year.

In the third scenario based on four working days, one holiday and two days of lockdown (commercial activities to remain off for two days), the POL saving in import bill could be around $230 million or about $2.7 billion.

This case, however, is considered too harsh as it could negatively affect public confidence.