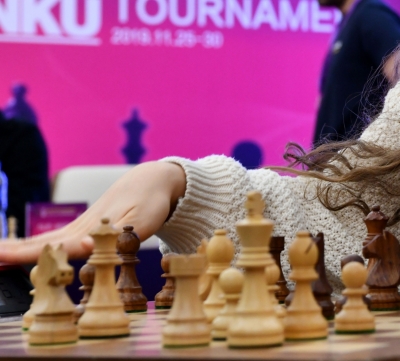 Chennai, May 23 (Ajit Weekly News) The International Chess Federation or FIDE’s Presidential elections as of now will see a three-way contest with Belgian filmmaker Inal Sheripov throwing his hat into the ring.

According to FIDE, Sheripov’s ticket for the Presidential polls has been officially submitted to it with supporting letters from the federations of Ukraine, Zambia, Sierra-Leone, Barbados, and Timor Leste.

The ticket includes Lewis Ncube (Zambia), current President of the African Chess Confederation, as a candidate for the Deputy President’s post.

Born in Grozni in the erstwhile USSR in 1971, Sheripov made a career as a filmmaker, producer, and screenwriter.

Among others, he is twice the winner of the Lumiere Brothers Prize (Naples, Italy), as well as the Angel Film Awards (Monte Carlo, Monaco), and the Federico Fellini Award (Jakarta, Indonesia).

According to FIDE, Sheripov moved to the US and has resided in California and, more recently, in Belgium.

An art collector, he has one of the largest collections of Belgian impressionist painters.

In 2017, he founded, together with FIDE and the Belgian Art Institute, the international non-profit association ‘World Chess Culture’ that he presides. World Chess Culture is currently involved in developing an interactive chess museum, which plans to open in 2024 for the 100th anniversary of the founding of FIDE.

Sheripov learnt to play chess at the age of five and became a member of the Grozny chess club. During the eighties, he won several championships of the Chechen-Ingush autonomous republic, and in 1988 he became the winner of a zonal championship of the USSR in the junior category.

His rapid rating is 2,290, and the last time he competed was at the Rapid Belgian Championship in 2018, where he took sixth place. Since 2020, he has played under the Belgian flag, FIDE said.

The two other contestants for the President’s post are incumbent Arkady Dvorkovich and Enyonam Sewa Fumey, Vice President of Togo Chess Federation.

Elections for the FIDE will be held in the Four Points by Sheraton Mahabalipuram Resort & Convention Centre near here alongside the 44th Chess Olympiad in July-August.