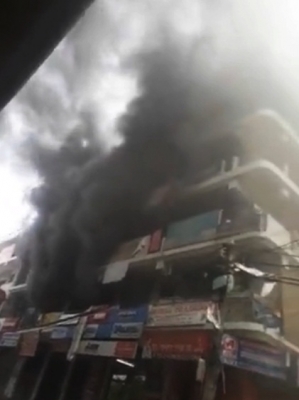 Noida, May 23 (Ajit Weekly News) A major fire broke out at a building in the Nithari village of Noida on Monday, officials said.

The official informed that the fire broke out around 1 p.m. at Hansraj tower located in Nithari village of the Gautam Budh Nagar after which three fire tenders were immediately pressed into service.

As the firemen reached, they realised that the blaze was massive and subsequently three more fire engines were rushed to the spot.

“There have been no injuries or casualties in the incident,” the official said.

Thick plumes of black smoke could be seen billowing out of the 5-storey building. According to the official, the cause of fire is yet to be ascertained, however, there was certainly massive loss of property.

The official confirmed that the fire has now been brought under control.