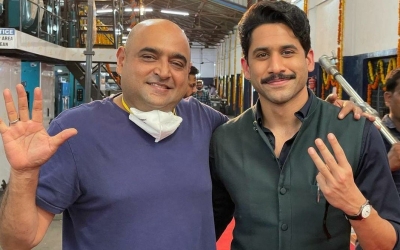 Hyderabad, May 23 (Ajit Weekly News) Naga Chaitanya, who is currently working on a number of projects, recalled his previous film ‘Manam’, which released eight years ago.

The ‘Majili’ actor penned a short but heartfelt note on ‘Manam’, one of his most memorable films, while sharing a photo from the sets of his upcoming project ‘Dootha’.

“8 years of #Manam being on the floors today with Vikram Kumar and sharing the same passion.. probably the best way to celebrate this journey! Thankful!! #ANRLivesOn,” Naga Chaitanya’s note reads.

Naga Chaitanya and director Vikram Kumar also share a light moment in the photo as they pose together.

‘Manam’ is one of the most beloved Telugu classics, particularly among Akkineni fans. Akkineni Nageswar Rao, Akkineni Nagarjuna, Naga Chaitanya, Akkineni Akhil, and Nagarjuna’s wife Amala Akkineni are among the film’s star cast.

Naga Chaitanya will next appear in Vikram Kumar’s ‘Thankyou’, while the duo is collaborating for their web series ‘Dootha’ as well.