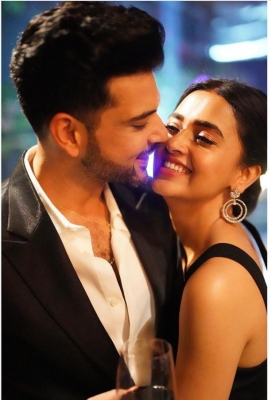 Mumbai, May 23 (Ajit Weekly News) Popular TV actor Karan Kundrra recently opened up on his marriage plans with Tejasswi Prakash and shared that the latter is the one who is delaying their wedding as she is too busy.

He also said that their parents often meet with each other.

Karan and Tejasswi are the most loved couples post their stint in ‘Bigg Boss 15’. Their fans call them TejRan and the duo keep posting their reels on social media.

In one of the pictures, Karan was seen planting a kiss on Tejasswi’s cheek, while in another Tejasswi hugs Karan from the back.

During a media interview, Karan said that they don’t hide anything and go with natural progression.

“When it comes to marriage, ‘Madam ke pass time kahan hai’ (Madam Tejasswi has no time,” Karan said, adding that Tejasswi keeps blaming him in her interviews for the delay and now he is doing the same.

In another interview to media he also shared that they both were destined to meet on ‘Bigg Boss 15’ and that was the reason both agreed to do the show together despite the fact they were being approached for years.