IPL 2022: Will take confidence from earlier knocks into the playoffs, says Jos Buttler 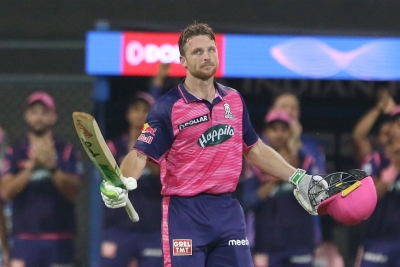 Kolkata, May 23 (Ajit Weekly News) Swashbuckling Rajasthan Royals opener Jos Buttler on Monday stated that he will be taking a lot of confidence from the knocks he played in the first half of IPL 2022 into the play-offs stage.

Buttler has scored 627 runs with the help of three centuries and as many fifties at a strike rate of 147 in leading the batting charts of the tournament. But in the last three matches, the England opener has recorded three single-digit scores of 2,2, and 7.

“I’ve obviously been delighted with my form in the IPL, but a bit disappointed with the last few games. The first half (of the tournament) I was playing some of the best cricket I’ve ever played, and I’m still taking lots of confidence from that going into the playoffs,” stated Buttler in an official release by the franchise on the eve of their Qualifier 1 match against Gujarat Titans at the Eden Gardens.

Buttler is currently into his fifth season as a Royals player, but he feels at home as ever and has also been excited by new friendships he’s built on the side, especially with leg-spinner Yuzvendra Chahal. “I said at the start of the season that I was looking forward to getting to know Yuzi, and I’ve really enjoyed it. I think having played against him and now with him, he’s one of those great characters that you want to be in the team with.”

“He’s sort of the go-to guy for most people and has a lot of fun with everyone. He’s always encouraging you and always looking out for everyone, and I think that is part of the DNA of the Royals and one of the reasons we’ve been enjoying our cricket so far.”

Skipper Sanju Samson is leading the franchise for a second full season but says not much has changed in the way he leads. “I think I’ve actually developed and kept on learning as a batter and also as a captain. I’m really enjoying the responsibility of leading this team, especially with so many experienced players in our side. I think when you lead a side, it’s very important to have that kind of perspective where you allow people to come and talk to you in pressure situations and allow them to express their ideas”

Samson revealed that he gets information from every player in the team before taking any decision on the field. “I do receive a lot of information, a lot of suggestions from Ash bhai, Yuzi, or even Devdutt, when he’s in the slips, even though he’s one of the youngest members of the team.”

“So, I’m really enjoying the unity and the willingness of everyone to contribute to the team, and I think it’s very important to listen to everyone. But I also know that the final call has to be from my side, and I have to take ownership of each and every decision made by the team.”

Over the course of the season, youngsters like opener Yashasvi Jaiswal, all-rounder Riyan Parag and speedster Kuldeep Sen have received a lot of backing, and Sanju has explained the thinking behind it. “I think to be very honest; I have also come through the same path with our franchise. I know how they might be feeling, so it’s very important for me as the captain to tell them what we expect out of them and tell them how good they are.”

“It’s very important to keep on reminding youngsters about how special they are and to make them realise that they are something special, that’s why they are finding a spot in such a strong team like ours. On top of that, I just make sure they have the freedom to go out there and express themselves.”