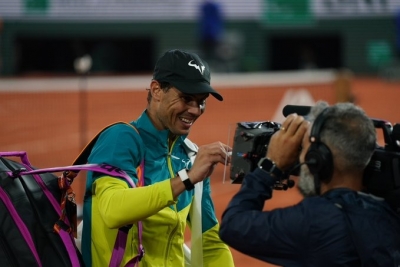 Paris, May 23 (Ajit Weekly News) The 13-time French Open champion Rafael Nadal powered Australian Jordan Thompson for a 6-2, 6-2, 6-2 victory in the first round at the Roland Garros, marking his 299th Grand Slam win here on Monday.

The Spaniard will now seek to join Roger Federer and Novak Djokovic in the 300-plus club in a second-round meeting with French wild card Corentin Moutet.

Nadal spoke of a chronic foot injury hampering his movement in a third-round defeat to Denis Shapovalov in Rome just 10 days ago, but the Spaniard’s movement and all-round game appeared in fine working order in a two-hour, two-minute victory on Court Philippe Chatrier.

Thompson reached the third round at Roland Garros in 2019 but was unable to counter Nadal’s brutal groundstrokes in their second tour-level meeting.

Nadal broke Thompson’s serve seven times in the match as he found a good rhythm on his familiar rasping forehand throughout. It was not a flawless performance from the Spaniard, whose level lapsed in the second set as Thompson battled to his only break of the match for 2-4. However, it was only a minor blip for the 21-time Grand Slam winner, who will be pleased with his first-round outing as he seeks a second major title of the year.

Nadal struck 27 winners to Thompson’s 14, a sign of his baseline dominance, but the Spaniard was also effective coming forward. He won 75 percent (12 out of 16) of points at the net as he frequently hurried his opponent into errors.