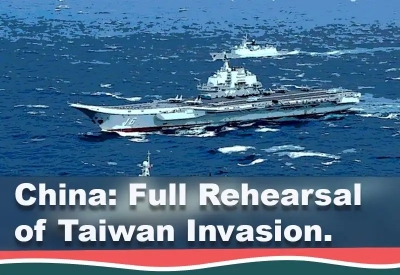 By Atul Aneja
New Delhi, May 23: An unprecedented and explosive audio leak of a top-secret meeting of the Peoples Liberation Army has revealed Chinas detailed plan to attack Taiwan.

Experts say that the audio clip posted on the YouTube channel of Lude media appears authentic. This will be the first time since the formation of the People’s Republic of China in 1949 that a recording of a top-secret meeting of a military command has been leaked.

Apparently, “allies” within the Communist Party of China (CPC), especially the military ( codename “Thunder”) carried out the recording of the meeting that took place on May 14. No wonder the knives are out to nail the source of the leak. The Lude media recording was also posted on the twitter account of Jennifer Zeng @jenniferatntd.

The leak has surfaced when the CPC is apparently experiencing a bitter power struggle ahead of the 20th party congress later this year, which will deliver a new leadership, including the General Secretary of the CPC as well as the standing committee of the Politburo, comprising seven to nine members, forming the core of the party-state for the next five years.

The meeting steered by the hybrid leadership of the Guangdong Military Region reveals that during the operation against Taiwan, China will have to safeguard the Pearl River Delta area in the Guangdong province. A densely populated area, it is the heartbeat of the Chinese industry. The province is majorly responsible for turning China into the workshop of the world. It includes Guangzhou, a world class trading hub, Shenzhen, the hi-tech capital, where giants of the digital age, such as Huawei and Tencent Industries are headquartered. Other major cities of huge importance include Foshan, the furniture capital, Dongguan, Zhongshan, Hong Kong and Macau.

Stability of the Pearl River Delta would be key to the stability of Guangdong and China.

The meeting also revealed vital industries that would play a central role in the execution of the war. These include, companies that are involved in drone manufacturing, production of boats, as well as telecommunication companies and satellite services companies, all of which are real companies and these companies’ operations match with the functions that they are being given in the meeting.

Among others, it mentions “at present we rely on Zhuhai Orbita, Shenzhen Aerospace Dongfanghong Satellite Co., Foshan Deliya and Ji Hua Laboratory, and have formed four satellite detachments. We have in total 16 low-orbit satellites, with 0.5 to 10 meters global remote ultra-high optical resolution sensing and imaging capabilities.”

The contents of the audio clearly point that the meeting was to discuss pre-war preparation. There are many different voices speaking in the audio which shows that it is more of a discussion style meeting in which different speakers have prepared their own points and are giving suggestions. Going by the speeches and the salutations used, it appears that among the political leadership, Guangdong’s party secretary, deputy secretary, governor and vice governor are present in the meeting apart from the others that cannot be identified. Among the military personnel, Zhou He, major general of People’s Liberation Army, commander of the Guangdong Military Region; Wang Shouxin, standing committee member of Guangdong Provincial Committee, political commissar of Guangdong Military Region is present.

It says that the meeting is taking place to discuss orderly transition from normal to war status, to discuss military planning, and mobilization. Three tasks are being focused on by the meeting of the standing committee of the Guangdong provincial party committee. 1. Establishing a national defence mobilization command system 2. Implementation of a wartime work mechanism 3. To carry out wartime supervision preparation. It then notes that all levels, all regions, and all departments in the province should quickly adjust the work priority, moving from focusing on economic development to ensuring strategic victory. It discusses the introduction of measures to “guide and support high-tech and special enterprises that are included in the ‘potential resources in new domains and new systems’ list to expand their production. “

It also focuses on ensuring stable production and ensuring the security of the supply of important strategic materials. It mentions smashing Taiwan independence forces and not hesitating to start a war, resolutely defending national sovereignty and territorial integrity. “This is the Party Central Committee, General Secretary Xi Jinping’s major strategic decision in view of the big picture of international and domestic affairs, as well as the overall strategic situation of the great rejuvenation of the Chinese nation. It was made after carefully reviewing the timing and the situations.” It talks about strengthening the role of Guangdong (for military action). It says “After the meeting, the Provincial Party Committee General Office issues the minutes of the meeting. It is recommended that all departments follow the deployment of the meeting, immediately open a joint military-civilian command and operational command posts, specifically plan and deploy, and organize the province’s Normal to War status transition work.”