BJP targets to reach voters of 51,000 booths ahead of Gujarat polls 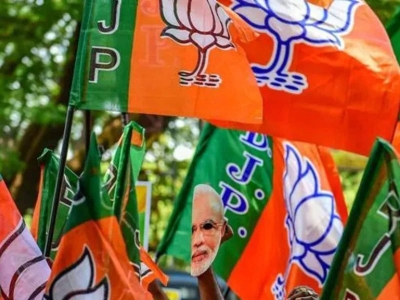 Gandhinagar, May 23 (Ajit Weekly News) The BJP working committee has decided to reach out to voters of 51,000 booths across 182 assembly seats in Gujarat next month. The party will run a drive from June 11 to 13. The main aim of the campaign is to ensure that people should know about development programmes rolled out by the state and central governments and how they benefited from them.

Though the party has a strong presence in the state, it has also launched an extension programme under which 104 Assembly constituencies will be covered by the end of this month. Setting the target, state party chief C.R. Patil said, the second phase will be launched from June that will cover the rest of the assembly seats. Some 12,500 Vistarak (party workers/leaders) of 10,069 Shakti Kendras will be carrying out the party’s expansion programme and will try to convey party messages to them, he said.

Party’s 84 per cent committee formation has been completed, but Patil has asked local leaders of the respective districts and cities to put the remaining work on the fast track and complete it as the party thinks the page committees will play a key role in converting votes and increasing vote share. Because of this programme, around 60,000 members have joined and are associated with the party.

The central government has extended Rs 200 subsidy on gas cylinders supplied under the Ujjawala programme. The state government also decided to scrap the Par-Tapi-Narmada river inter-linking project in the interest of tribals, Patil said.

The party has decided a week-long programme to observe Prime Minister’s completion of eight years in office, said Vinod Chavda, General Secretary of the party. On May 31, the Prime Minister will be virtually addressing farmers and talk about Kisan Samman Nidhi and its benefits, members of the Kisan Morcha and Shakti Kendra will participate in the virtual meeting.

On May 30, the party national president will launch a book on the achievements of the central government in eight years. This book will be circulated among citizens so that it reminds them about the BJP government’s commitments and delivery, added Chavda.