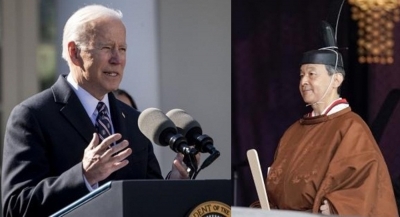 Biden arrived at the Imperial Palace and was greeted by Naruhito, reports Xinhua news agency.

The pair, both wearing masks, exchanged greetings and pleasantries prior to entering the palace.

The meeting was their first since they met in December 2013 as Crown Prince and Vice President under the administration of former President Barack Obama, according to the Imperial Household Agency.

Following Biden’s meeting with the Japanese Emperor, the President will hold talks with Japanese Prime Minister Fumio Kishida focusing on a range of security and economic issues, officials here have said.

President Biden arrived in Japan n Sunday, as about 750 people took to the streets of Tokyo to demonstrate against the upcoming US-Japan summit and the Summit of the four-member Quad group.