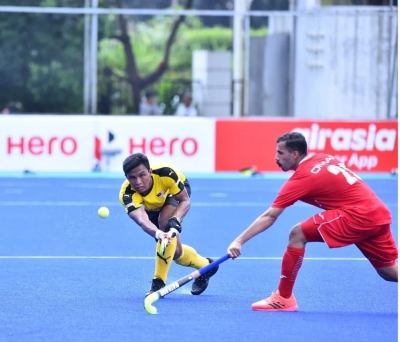 Jakarta, May 23 (Ajit Weekly News) With World Cup ticket at stake, Malaysia and Korea made winning start to their campaign on opening day of the Hero Asia Cup at the GBK Arena here on Monday.

Riding on a hat-trick of goals by penalty corner specialist Razie Rahim in the 6th, 13th and 19th minute, Malaysia posted a strong 7-0 win in their first pool B match. The early 3-0 lead, put them in advantage. Experienced striker Faizal Saari then pushed the lead to 4-0 with a fine goal in the 23rd minute to end the first half with a formidable total on board.

The ten-minute break gave the Malaysian side time to improvise their strategy as they came back stronger in the latter half of the match with better communication and structure to their play. They gave little room for Oman to create scoring opportunities, and their defence did well to stop Oman from converting the few PCs they were awarded.

“I was happy with the way the team closed down the game in the first two quarters and that made it easier for the team to finish off the last two quarters,” expressed head coach Arul Anthoni.

Regular goals by Shahril Saabah in the 34th minute, Faiz Jali in the 40th and Ashran Hamsani in the 48th minute ensured Malaysia ended up with the winning points.

“We spent a month in Europe before coming here and that really helped in the team bonding. The mentality of wanting to win in every match is very important particularly after 3 years of not being able to play hockey. From here on, we want to take one-match-at-a-time. Our first target is to finish top 2 in the pool stage,” Anthoni added after the match.

In the second match of the day, Asian Champions Trophy title holders Korea beat Bangladesh 6-1 in their pool B match. Despite the humid conditions here, the team lived up to the billing and delivered a strong performance. They overcame a sloppy start, having conceded an early goal to Bangladesh in the 6th minute through a penalty corner by Khorshadur Rahman, and ensured they converted from the penalty corners they created.

As many as four goals came from PC specialists Taeil Hwang (13′), Jonghyun Jang (18′, 52′) and Jihun Yang (45′) while Hwang also added a field goal to his name in the 22nd minute and Namyong too scored a goal in the 32nd minute.

“The last time we played in the World Cup was 14 years ago. After winning the Asian Champions trophy in December, we kept a target of doing well here in Hero Asia Cup to qualify for the World Cup in Bhubaneswar. The team played to the plan and it was important to score a big win,” stated Korea head coach Shin Seok Kyo.