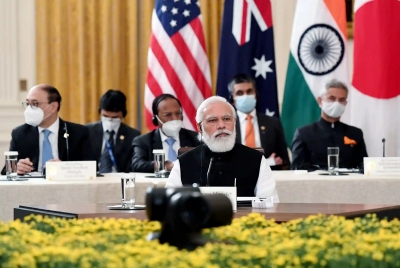 In addition to taking the discussions and actions on the Quad forward, the visit will be a welcome opportunity for PM Modi and the other leaders to meet and interact with the new Australian leadership (PM Albanese will be accompanied by his foreign minister Penny Wong on his visit to Tokyo). Penny Wong, as the shadow foreign minister, had participated virtually in the Raisina Dialogue held in New Delhi in late April, 2022.

PM Albanese had met EAM Dr. S. Jaishankar (and the foreign ministers of USA and Japan) bilaterally during the Quad foreign ministers meeting in Melbourne in February this year. Both PM Albanese and FM Wong have had warm and positive remarks to make about India and relations with New Delhi during their election campaign. It is, however, not very clear as to what their position on relations with China and the latter’s assertiveness in the South China Sea, East China Sea and Asia in general would be.

This would be a good opportunity for PM Modi and the other leaders to make their own assessment about the position on relations with China that the new Australian leadership is likely to take. There is certain wariness and anxiety regarding the position of Australia in the Quad going forward because of the unhappy experience in December, 2007 when Kevin Rudd was elected Australia’s Prime Minister and decided to withdraw from the Malabar exercises and further Quad deliberations. It is however stated by strategic analysts that the Australian Labour Party of today is very different from the one that prevailed in 2007. PM Modi and the other Quad leaders will get a first-hand opportunity to make their assessments. It is of course reassuring that PM Albanese decided to take the oath of office on Sunday so that he and his foreign minister could travel to Tokyo to take part in the Quad deliberations.

No political or security analyst could have anticipated a little more than a year ago when Joe Biden took over the reins of office as President of the United States that four meetings of The Quad would take place within a span of 15 months! President-elect Biden did not refer to the Quad from the time he got elected in early November, 2020 till January, 2021 when his inauguration of his Presidency took place. Many strategic experts surmised that he might be wary of according much significance to the Quad as it was revived at the initiative of his predecessor Donald Trump in November, 2017 in Manila, Philippines, on the sidelines of the East Asia Summit.

President Biden however surprised all his detractors and naysayers by hitting the ground running and by organizing the first virtual meeting of the foreign ministers of the Quad nations in mid-February, 2020, and a virtual Summit among the leaders of the four countries in March, 2020. This was followed by an in-person meeting in Washington DC in September, 2021 and again a virtual Summit in March this year.

This is strong affirmation and unambiguous testimony that President Biden has not allowed the war in Ukraine, which started with the aggression by Russia against Ukraine on February 24, to distract him from the Indo-Pacific and the Quad. On the contrary, the unmistakable message going out to the world is that the Quad is vigorous and vibrant and determined to accomplish the objectives for which it was established.

Deliberations at the previous Quad Summits and interactions among the foreign ministers of the four countries have sent out a clear message to China that these four countries are determined to push back against China to protect and safeguard their political, security, strategic and economic interests.

The positive decisions taken by leaders of the four countries in the previous Summits encompass a multitude of areas including manufacturing and distribution of vaccines against the Covid-19 pandemic, promoting maritime awareness and security, collaboration in high technology sectors like Artificial Intelligence (AI), 5G, robotics; establishing trustworthy and resilient supply chains; cooperating to combat the rapidly advancing climate change; enhancing connectivity and infrastructure projects; promoting human rights and democracy in the world etc. This clearly brings out that the grouping has a wide-ranging and positive agenda. In addition to countering and balancing China’s aggressive maneuvers in its neighborhood and through its Belt and Road Initiative, the Quad is committed to promoting peace, security and prosperity in the Indo-Pacific and beyond. As PM Modi said at the first virtual Quad Summit in March, 2021, the ‘’Quad is a force for global good.”

The progress of the Quad over recent months is all the more noteworthy as just about 19 months ago when the Quad Foreign Ministers met in person in Tokyo in October, 2020, no Joint Statement was issued and countries like India were even reluctant to identify the Grouping as ‘Quad.’ Since then, a Joint Declaration was issued after the virtual Summit in March, 2021, and three Working Groups were established on Covid-19 and Vaccines, Climate Change, and emergent Technologies.

After the deliberations at the first in-person Summit in September, 2021, a comprehensive and substantive Joint Statement along with a Fact Sheet on some of the significant decisions like Climate Change, Covid-19, Infrastructure, emergent Technologies, Quad Fellowship in STEM subjects, people-to-people contacts, cybersecurity, space, semiconductor supply chain Initiative etc. were issued. At the September, 2021 Summit, the leaders declared that ‘’Quad is a force for regional peace, stability, security, and prosperity. Towards that end, we will continue to champion adherence to international law, particularly as reflected in the UN Convention on the Law of the Sea (UNCLOS), to meet challenges to the maritime rules-based order, including in the East and South China Seas.” Without mentioning China, the Quad threw the gauntlet to China to abide by international law, particularly UNCLOS, including in the South and East China Seas.

China has been denouncing the Indo-Pacific and the Quad since the announcement of its revival in November, 2017. More recently China has become nervous by its progress and the significant traction it has gained, and become more strident in its criticism. It termed it as ‘Asian Nato’ established to contain China. In this criticism, it has been supported by Russia. Just before the September, 2021 Summit, China condemned the gathering as a ‘clique’ and declared that it will not be supported by any country.

With the passage of time since its reinvigoration in 2017, the Quad leaders have found it prudent to expand the scope and coverage of its activities. This has probably been done to make the grouping more attractive to other countries like the ASEAN members, ROK, European countries etc. as they would be loath to choose sides between USA and China, as USA is a major security and stability provider, while China is a vital trade and investment partner, particularly after the launch of its BRI in 2013.

At the second in-person Quad Summit on 24th May, the four leaders are expected to announce future partnerships and projects across various sectors. As many as 12 working groups have been created thus far as part of the Quad grouping.

Announcing the Prime Minister’s visit to Tokyo, the External Affairs Ministry declared that PM Modi will have 23 engagements, including meetings with the three world leaders, business, diplomatic and community interactions during his stay in Japan. He will interact with at least 36 Japanese CEOs and also with hundreds of Indian diaspora members.

The summit will take place amid the Russian invasion of Ukraine. While discussions on the Russian war against Ukraine are certain to be held, it is unlikely that the issue will be allowed to hijack the deliberations on other important issues. Like during the 2+2 meeting between India and USA on 11th April, 2022 at which President Biden and PM Modi had a virtual meeting, as also during the recent 3-day, 3-nation tour of PM Modi to Europe from 2nd to 4th May, 2022, the focus of the deliberations would be on ways to advance the substantive areas like Covid-19, climate change, emergent technologies etc. which could result in benefit to all the Indo-Pacific nations. The Summit will provide ‘’an opportunity for the leaders to exchange views about developments in the Indo-Pacific region and contemporary global issues of mutual interest.” The leaders can be expected to ‘’review the progress of Quad initiatives and working groups, identify new areas of cooperation and provide strategic guidance and vision for future collaboration.”

Focus of the QUAD meeting and bilaterals of PM Modi with other leaders will be on the increasing presence of China in the Indo-Pacific Region, the ongoing Russia-Ukraine war, COVD-19 vaccine initiative and other issues of mutual interest including clean energy. In 2021, the QUAD had announced a vaccine partnership and the aim of the initiative was to provide one billion doses of vaccines by the end of 2022 to the Indo-Pacific region. The leaders will also discuss continuation of cooperation on COVID-19 response as well as improving the health infrastructure.

Timing of the second in-person Quad Summit is most opportune. By holding the Summit in Tokyo within 7 months of the last in-person Summit, the Quad countries are sending out a categorical and unequivocal message that they continue to be focused on peace, stability, security and prosperity in the Indo-Pacific, notwithstanding the continuing aggression in Ukraine.

It is also time that the Indo-Pacific region and the world at large should see some concrete achievements and deliverables of the Quad deliberations. This is essential for the credibility of the Grouping. Issues like supply of vaccines to Indo-Pacific nations, collaboration in new and emergent technologies, initiatives in infrastructure development, education, resilient supply chains etc. need to be fast tracked so that benefits of discussions amongst these countries are visible to the countries of the region. This will help to generate support, both for the Indo-Pacific as well as the Quad, and help in their emergence as instruments of stability and prosperity of the region.