AIADMK, DMK in war of words over Udayanidhi Stalin's movie in Puducherry 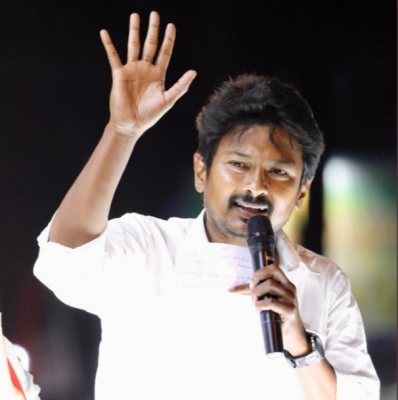 Puducherry, May 23 (Ajit Weekly News) The AIADMK and the DMK have entered into a war of words in the Puducherry after the latter requested the Chief Minister to provide a tax relaxation to DMK leader Udayanidhi Stalin’s movie ‘Nenjukku Needhi’ that is based on an anti-caste narrative.

DMK Puducherry unit leaders had requested Chief Minister, N.Rangasamy to provide tax exemption to the latest movie of Udayanidhi Stalin who is the MLA of Chepauk in Chennai and son of Tamil Nadu Chief Minister M.K. Stalin.

However, the AIADMK leadership opposed this, and party Puducherry east state secretary, K. Anbahazhagan in a statement said the DMK was trying to divide the people on caste lines.

Anbazhagan in the statement said that the DMK never paid tax exemptions for the welfare of Scheduled Caste communities in Puducherry and that the party was enacting a drama for the film of Stalin’s son.

The DMK led by Puducherry leader of opposition and party parliamentary party leader, R. Siva had urged the Chief Minister that the movie ‘Nenjuku Needhi’ was based on caste discrimination in the country and that even after 75 years of the country gaining Independence, caste-based inequalities exist in the educational institutions, offices and public places in India. The movie also shows how Article 15 of the constitution forbids discrimination on grounds of religion, race, caste, sex, or place of birth.

The DMK leadership also said that the movie propagates the message of equality to the future generations and that it aims to bring out stories of the marginalised people and encourage the creation of a society with social justice.

The AIADMK countered the arguments of DMK by stating that there was no caste inequality in Puducherry and that people in the Union Territory were living with sentiments of brotherhood after keeping caste and religion aside.

AIADMK leader Anbazhagan in his statement called upon Chief Minister N. Rangasamy not to accept the request of the DMK to provide income tax relaxation to Udayanidhi Stalin’s movie.

The Puducherry unit of the AIADMK said that while the UT government was paying the fee of SC students, the DMK government of Tamil Nadu was not doing so.

The AIADMK leadership of Puducherry also urged the Chief Minister not to give tax exemption to the movie as it would create wrong precedence.