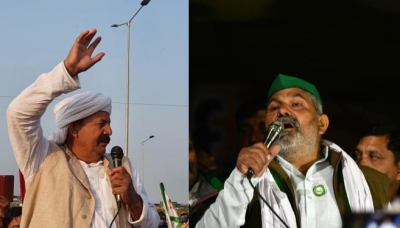 Muzaffarnagar, May 23 (Ajit Weekly News) After facing a split in the Bhartiya Kisan Union (BKU), the Tikait brothers are now facing a probe on allegations of grabbing government land.

Rahul Mukhiya, one of the residents of Sisauli village in Uttar Pradesh’s Muzaffarnagar district, has alleged that BKU chief Naresh and his brother Rakesh Tikait have “illegally occupied” government land.

“The land parcel was allotted by the government to build a pond in Sisauli a decade ago. However, Tikait brothers have filled the pond with soil and illegally constructed residential properties on it. I had informed the district level officers about the issue in writing and the Union Minister of State Dr Sanjeev Baliyan was also apprised of the situation but no action was taken,” he said.

Sub-Divisional Magistrate of Budhana area, Arun Kumar said: “The investigation will be conducted accordingly in case as complaint has been filed. We will investigate the matter and take action accordingly.”

Rahul Mukhiya also warned that if no action is taken by the district administration in this matter, he will go to Prime Minister Narendra Modi and Chief Minister Yogi Adityanath to plead for justice.

Meanwhile, Naresh Tikait said that the allegations were “baseless” and he was “ready for any inquiry”.

“I don’t know why these people are accusing us. We didn’t capture any government land, all allegations are baseless,” he said.