Women's T20: Women's IPL will give more opportunities for the girls to perform, says Harmanpreet 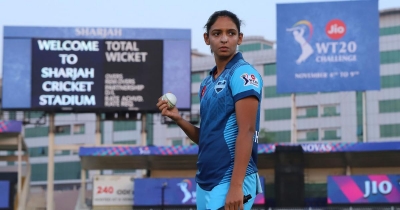 Pune, May 22 (Ajit Weekly News) Since the news of the Board of Control for Cricket in India (BCCI) proposed to start a full-fledged six-team women’s Indian Premier League (IPL) from next year, many in the cricketing world welcomed the possibility of it.

With the upcoming women’s T20 Challenge, starting at MCA Stadium from Monday, more or less it is believed that this will be the final time of the three-team event, which began as an exhibition match in 2018 before being upgraded to current format in 2019.

Harmanpreet Kaur, India’s T20I captain, who will be leading Supernovas in their first match against reigning champions Trailblazers on Monday, felt that the legacy of this event will be in giving the young Indian cricketers a platform to showcase their skills and establish themselves firmly in the Indian team.

“If we look at the three years that we’ve played these matches, we got very good players like Shafali (Verma), Richa (Ghosh), and even Pooja (Vastrakar) tried to prove herself through this tournament. We get quality games and the domestic players get a lot of chances to perform,” said Harmanpreet in the pre-match virtual press conference.

“Maybe this will be the last edition (of T20 Challenge) and next year we’re looking positively at the IPL and that will give more opportunities for the girls to perform. In the last two-three years, if we talk about the advantages of this tournament, the performance of the girls in the T20 team and the improvement in their performances, it is because of these games. This tournament has helped us,” added the right-hander.

With each team getting just two matches, Harmanpreet admitted that achieving a balance between giving chances to youngsters and forming a combination to have a crack at winning games will be a tough task.

“It’s a small tournament and there are many players looking for opportunities. It’s really difficult, you have only two important games and you have to win, and you have to give chances to young players also. So that’s been my discussion with the coach, deciding on the best eleven.”

“You try to balance things, and that’s what we are trying to do as it is a short tournament. Firstly, try to balance our playing eleven, and if there is a scope to do some changes in the next game then we will do. The priority is to go out and win and whatever combination is best for that, we will try to do for achieving that.”

The scheduling is such that Supernovas will play an evening game against Trailblazers on Monday and will play their next game against Deepti Sharma-led Velocity on Tuesday afternoon. Harmanpreet revealed that the side has been planning meticulously to have ample recovery time in the gap between back-to-back games.

“When we got our schedule here, we realised that there will be back-to-back matches. We had discussed this (with our trainers) on the first day that how we have to manage ourselves due to back-to-back matches. We planned long sessions, then took a break and with the consecutive matches, today’s practice session will be less, then try to get into recovery and be ready for the next game.”

But is the women’s IPL which is the obvious crucial stepping stone for women’s cricket in the country. “If we talk about women’s IPL, I think for us right now it is important to get the tournament. It is totally in BCCI’s hands on how it should be organised as they have always thought of our best interests and it’s totally dependent on them. For us, it is important that we get that tournament,” concluded Harmanpreet.