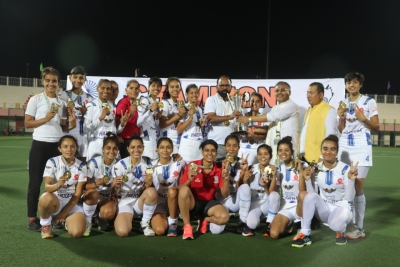 Riya (13′) and Sejal (39′) scored a goal each to help Hockey Haryana successfully defend the Title in what was a thrilling 2-0 win for the team.

Expressing his delight after the title win Hockey Haryana Coach Azad Singh Malik said, “Hockey Jharkhand are a very strong side, we knew it was going to be a challenging game. We went with a defensive strategy today and just tried to keep the ball as much as we can. I am really happy that the players showed great character, maintained the structure and just stuck to their plans throughout the game.”

“It’s a great achievement for any team to defend the Title at any stage, and it shows that Hockey Haryana has its own legacy in this tournament. It’s a special win for these young girls as well. You know it’s a huge stepping stone for these players which will motivate them to do well in future,” he added.