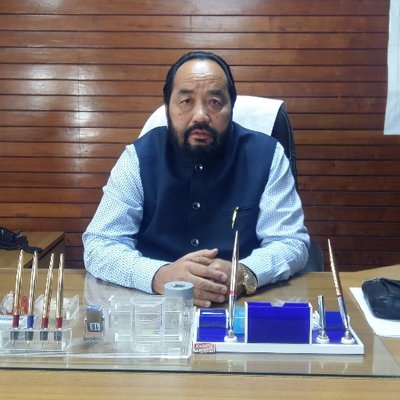 <br>But the political pundits and leaders of various political parties are doubtful whether the much awaited Naga peace talks would be completed in the next 8 to 9 months.

Nagaland Deputy Chief Minister Yanthungo Patton, who is also the BJP legislature party leader, in a recent public meeting in Wokha district categorically said that the Centre should resolve the Naga peace talks issue by August 15 this year.

Accompanied by Patton and other Naga leaders, the Chief Minister held a meeting with Union Home Minister Amit Shah on Wednesday in New Delhi.

Both Shah and the Nagaland delegation remained tightlipped about whether they discussed the Naga political issue, but Rio said that discussion with the Isak-Muivah faction of the National Socialist Council of Nagaland (NSCN-IM) was on.

The Nationalist Democratic Progressive Party (NDPP) is the dominant party of the ruling alliance in Nagaland with the Bharatiya Janata Party, which has 12 MLAs, as one of the important constituents.

Last month, 21 of the 25 MLAs of the Naga People’s Front (NPF) merged with the NDPP increasing the strength of the NDPP to 42 in the 60-member Assembly.

Both the BJP, the NPF and the NDPP are the constituents of the opposition less all-party United Democratic Alliance (UDA) government, formed last year to take forward the Naga political issue between the Centre and Naga outfits and various other groups,

Political commentator in the northeast region and writer Sushanta Talukdar felt that settlement of the Naga political issue before the upcoming assembly elections is a remote possibility.

"The dominant Naga group NSCN (I-M) has been insisting on a solution on the principle of "shared sovereignty", which the outfit has been claiming was included in the Framework Agreement, signed on August 3, 2015.

"The Central government had ruled out any solution outside the Indian Constitution," Talukdar told Ajit Weekly News.<br> <br>Former Nagaland governor and the Government of India’s interlocutor for the Naga peace talks Ravindra Narayan Ravi in an interview to a leading Nagaland daily had clarified that the Framework Agreement had no mention of "shared sovereignty" in it.

After Ravi was transferred to the gubernatorial post of Tamil Nadu last year, former Special Director of the Intelligence Bureau A.K. Mishra was assigned to the Naga peace talks.

There was an open difference of opinion between the NSCN-IM and Ravi leading to the deadlock in the peace process and culminating in his transfer to Tamil Nadu.

Ravi in the interview had said: "There is no mention of integration in the Framework Agreement. There is no mention of Nagas as a separate entity. Of course, it recognises the unique history of Nagas. The Framework Agreement is a commitment to settle the Naga political issue on the basis of power sharing with due regard to the contemporary realities."

Before the Framework Agreement, the government signed a formal ceasefire agreement with the NSCN-IM in 1997 and it was extended indefinitely since 2007.

Mishra during his second week-long visit from April 18, met the Chief Minister, leaders of the NSCN-IM, Naga National Political Groups (NNPG), core committee on Naga political issues as well as the Naga civil society and discussed the peace talks issue.

The recent political developments in Nagaland including the merger of 21 of the 25 MLAs of the NPF with the NDPP are very significant moves ahead of next year’s assembly elections.

All the political parties in Nagaland are keen to resolve the vexed Naga peace talks issue before the polls.

The Centre has been separately holding peace talks with the NSCN-IM and eight other Naga groups, which came together a few years ago under the banner of NNPGs.

During an Assembly session last month, all legislators, cutting across party lines, strongly urged the Centre to settle the issue at the earliest as Assembly elections are due early next year.

Participating in the discussion, Rio had urged the negotiating parties to settle the issue, and that if a settlement cannot be reached, there should be a fresh mandate by the people on how to pursue the Naga political issue.

Noting that 17 resolutions on the Naga political issue have been passed in the Assembly since 1964, he said: "But if a solution is not arrived at, and insurgency activities continue, the future of the younger generation remains at stake."

Since 1997, the Government has held more than 85 rounds of negotiations with the NSCN (IM) and other Naga groups.

However, the NSCN-IM’s insistence on a separate Naga flag and Constitution have become big hurdles.

The former government interlocutor and then Nagaland Governor R.N.Ravi had rejected these demands on a number of occasions.