Not on the radar of bulldozers, Delhi's illegal factories are ticking time bombs 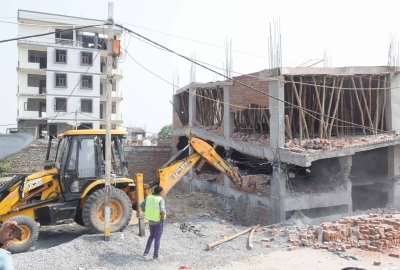 <br>People usually visualise a factory as a big building in an open space with a chimney on the top, but, the reality bites in Delhi, and one wonders why these are not on the radar of bulldozers.

The city is the epicentre of thousands of such factories and are ticking time bombs. When Ajit Weekly News compiled the data of major fire accidents that have occurred in the past couple of years, the factories being run without fire safety standards, were found to be a substantial part of such incidents.

Twenty seven human lives perished on May 13, Friday, in one of the deadliest tragedies that the national capital has seen in the recent past years. A massive fire gutted a four-storey building located near a metro station, charring to death 27 and wounding 12 people in west Delhi’s Mundka area.

In December 2019, 44 lives were claimed after a fire broke out in an illegal factory at Anaj Mandi. A firecracker storage unit in Bawana left 17 persons, including 10 women, dead in January 2018. If we do not go by the number of casualties, then fire breaks out every then and now in some Delhi factory.

Every year the Delhi Fire Service provides a Fire No Objection Certificate to around 50-70 factories, however, several still go unnoticed. A senior fire department official told Ajit Weekly News that they do not directly deal with the public to provide an NOC.

"We are not a licensing authority to do that. It is the duty of the building authority or the civic agency to refer the case to us before permitting or giving a license to a building or even a factory," the official said.

Pertinent to mention that most of the buildings that are gutted in fire incidents lack the fire safety standards and most importantly a Fire NOC.

A Fire NOC certifies that a building has been deemed complied with the fire prevention and fire safety requirements in accordance with Rule 33 of the Delhi Fire Service Rules.

Delhi Fire Service chief Atul Garg, while speaking to Ajit Weekly News, informed that till now 42 people have died in May, this year while 117 suffered injuries. The number of casualties in previous years during the month of May were — 41 in 2021, 10 in 2020 and 18 in 2019.

Clearly, the numbers have risen when compared to the previous years. Not just the number of casualties, the Fire calls also soared by 49 per cent this year in May.

Delhi Fire Service is constantly upgrading itself both technically and manually, but, the rising levels of temperature and population of the workers in the alleged factories are adding to the woes. Every year lakhs of poor people come to Delhi to improve their living conditions and finally get trapped in these factories as workers.

The gut-wrenching audio clip of a phone call between two brothers, where the one who was trapped inside the building told the other that he won’t survive and to take care of his family, during the Anaj Mandi blaze in 2019 was a wake up call for the authorities to prevent such incidents but even now, three years later, the incidents continue to happen.