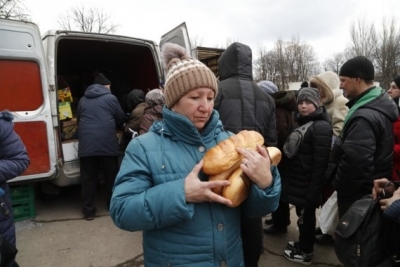 New York, May 22 (Ajit Weekly News) Bread is one of the more crucial ingredients in maintaining world stability — and it’s getting dangerously expensive, Axios reported.

As food prices rise around the world due to the war, extreme weather and inflation, more countries are putting these kinds of export controls in place — but that only exacerbates the issue.

At least 43 such protectionist measures have been implemented since the Russian invasion, according to data cited by the New York Times earlier this month.

These include restrictions put in place by Russia and its ally, Belarus, along with Indonesia’s ban on palm oil exports and China’s prohibition on fertiliser exports.

Wheat prices surged to near record-high levels Monday after India said it would ban exports as it deals with an extended, climate-change-driven heat wave.

“These measures threaten to further tighten global supplies, and will create price pressure on food as we head further into 2022,” Kelly Goughary, a senior research analyst at Gro Intelligence, told Axios.

Goughary has not seen this level of export controls in her 15 years in the industry.

Russia’s invasion of Ukraine cut off exports from that region — responsible for more than a quarter of the world’s supply — and sent buyers scrambling to find other source countries, like India.

India is the ninth-largest wheat exporter in the world, according to USDA stats, Axios reported.

There are few commodities more important than wheat, Axios reported. Rising prices for bread have led to social unrest throughout history from the French and Russian revolutions to the Arab spring.

More headwinds in the wheat market are coming, Goughary said. There are issues with drought in France that could drive up prices, while production in the US is down.

The US is not a big exporter of wheat because it’s too costly to ship overseas, but it’s a supplier of “last resort”, she added.