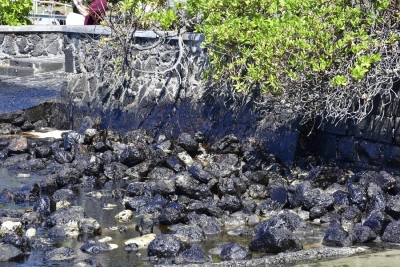 Mexico City, May 22 (Ajit Weekly News) Scientists at the National Autonomous University of Mexico have developed a new technique that can clean up oil as well as radioactive substances, fertilizers, drugs, and other pollutants dumped in the ocean.

The innovative technique involves nanotubes made from halloysite, a naturally occurring clay mineral, and magnetite, a highly magnetic mineral.

“We can apply a magnetic field to pull out the stain as if we had somehow thrown out a fishing net, and in this way, we can put out the oil,” project leader Marina Vargas Rodriguez told Xinhua news agency.

“If the spill occurs near the beach, we will have the option of pulling the contaminant into the open sea so that it does not affect our beaches and, at the same time, the oil can be recovered and reused.”

The technique has been tested on a number of different types of oil.

“The materials have the capacity to absorb oil and remain on the surface or wherever they are,” Vargas said.

The technology can clean up even the most viscous hydrocarbons, and once oil is recovered, it can be reused instead of being burned “in situ” and releasing harmful substances into the air.

“The fish are also affected because all that oil is incorporated into the food chain, the carcinogens stay there and, when we catch fish, we feed on those harmful substances that are still there,” Vargas said.

The newly developed technology does not affect wildlife and can be used on large oil spills as well as in the decontamination of rivers, lakes and lagoons.

And the cost is much lower than other techniques, as halloysite nanotubes are naturally occurring while carbon nanotubes must be synthesized, making them more expensive.

“The cost of the technology is very low and I think it would be worth applying it in any country with this problem. This type of advance has no nationality; it is a technology that can be used worldwide and we are open to any country or region that needs it,” Vargas said.

Oil spills are among the most serious environmental disasters and threaten biodiversity around the world.