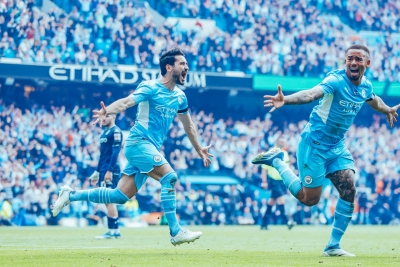 London, May 22 (Ajit Weekly News) Ilkay Gundogan contributed a brace as Manchester City struck three goals in six minutes to come back from a two-goal deficit to score a dramatic 3-2 win against Aston Villa and retained their Premier League title on a dramatic final day of the season on Sunday.

City, in a tight race for the title with Liverpool, were staring at a humiliating defeat as Matty Cash (37th minute) gave Aston Villa the lead and Philippe Coutinho made it 2-0 after 69 minutes. With Liverpool taking the lead against Wolverhampton Wolves at Anfield, which would have taken them to 92 points with City remaining at 90 in case of a defeat.

But that was not to be as Gundogan, who was brought in as a substitute, scored the first and the third goal as City produced an unforgettable fightback — scripting an Aguero-moment like 10 years ago. Gundogen (76, 81) and Rodrigo Hernandez (78) scored three goals within six minutes as Pep Guardiola’s side emerged 3-2 winners at Aston Villa and claimed the crown in a dramatic fashion.

This was Manchester City’s 8th Premier League title and their fourth title in the last five seasons.

City’s sensational victory ended Liverpool’s hopes of quadruple titles as they get ready to play the Champions League final.

As the final whistle sounded at Villa Park, Aston near Birmingham, the entire Manchester City travelling party and their hundreds of fans invaded the ground to celebrate the victory with the players.