KJo says Hindi, Southern cinemas must grow and do great business together 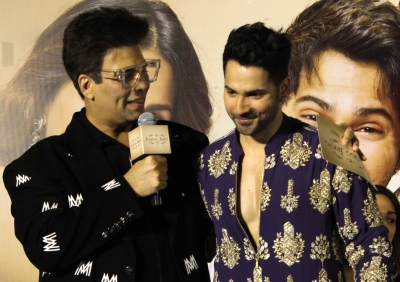 Mumbai, May 22 (Ajit Weekly News) Filmmaker Karan Johar, who is all set for the release of his next home production “Jug Jugg Jeeyo”, says that even though in the recent past, three South Indian films have done remarkable business at the box office nationwide, there is no competition or comparison between Hindi and southern cinema.

The filmmaker was present on Sunday along with the cast and crew of the trailer launch of his upcoming film.

During an interaction with media, he was asked if he feels the potential competition at the box office after the recent success of South Indian films. Johar said: “There is no competition between Hindi and south cinema. I was one of those filmmakers who presented ‘Bahubaali’ because I had faith in the power of cinema beyond language.

“There is no competition between these two industries, how can there be any? We should rather grow together. To compete would be not serving the main aim, that is, to do great business as one film industry.”

Before introducing the trailer to the members of the media, Johar emphasised the word ‘Hindi film trailer’ and then he was also asked the thought behind highlighting the language. “When films such as ‘RRR’, ‘Pushpa’, ‘KGF’ did great business and audience loved those films, we could proudly say that it is the achievement of the Indian cinema,” Johar said.

“Their success put our Indian cinema at a higher standard. Be it Prashanth Neel or Rajamouli sir, they in a way tried to prove the fact that our level of cinema could be that great!” the filmmaker added.

Johar continued: “So when during the trailer launch of my film I specified the film as a ‘Hindi film’ it is a function of technicality; our Hindi film ‘Gangubai’ did well, latest released ‘Bhool Bhulaiya 2’ has got a great opening, so as a maker of the film, we want out film also to come on that list of successful films.”

With Southern films minting money in the north Indian market, he said that is the ‘best crossover’ business for the film industry.

“When the south has done expansive business in the north, that is the best crossover. Going to any film festival or winning the Oscar does not matter to us, we want to grow as Indian cinema, as it has been proven time and again.”

Adding to that Varun Dhawan said: “In fact, that is the main purpose of cinema, to unite the country through cinema. So when these things happen it shows the unity among us.”