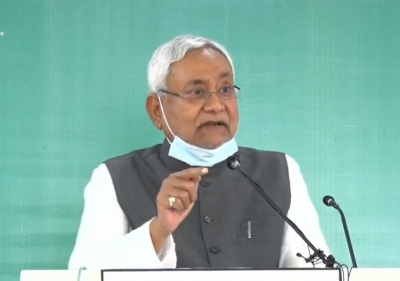 Patna, May 22 (Ajit Weekly News) The election for the five Rajya Sabha and seven MLC seats has reached an interesting position in Bihar as it will reflect the relationship of JD-U and BJP at the central level.

A highly placed source in the JD-U said that Nitish Kumar is firm on his decision to not to send RCP Singh in the Rajya Sabha for the third time and the latter is trying to regain the confidence of the Chief Minister again.

For RCP Singh, it was evident that he was the closest person to Nitish Kumar at a time. During the function, the gap between these two leaders was visible in the photographs.

RCP Singh reached the marriage function at around 7 p.m. and Nitish Kumar arrived at 8.30 p.m. When they sat on a reserved seating area, Nitish Kumar reportedly asked Ashok Chaudhary to sit in the middle of him and RCP Singh.

Later, Chaudhary posted a photograph of the three of them on Twitter.

This is one aspect of the sour relationship of RCP Singh with Nitish Kumar. In case RCP Singh would not be sent from the JD-U quota, what was the party’s participation in the Narendra Modi government? If RCP Singh is selected for the Rajya Sabha, he will have to resign from the post of cabinet minister.

Mathematically, JD-U has no strength to send two leaders to the Rajya Sabha. The Rajya Sabha members will be elected through the votes of MLAs and MLCs.

The Bihar Assembly has 243 seats and Legislative Council has 75 seats.

The 243 MLAs have the burden to elect five MPs of the Rajya Sabha. As per the mathematics, JD-U has 45 seats and it has support of an independent MLA and an LJP MLA. The total strength of JD-U is 47 now.

When it comes to elect one MP of Rajya Sabha, it requires 48 MLAs. Hence, the JD-U has to take help of one MLA either from HAM or AIMIM.

JD-U has already announced the name of Anil Hegde as a candidate of Rajya Sabha. But if RCP Singh manages to win the confidence Nitish Kumar, then the latter has to withdraw the Hegde’s name.

As per the electoral procedures, a Rajya Sabha candidate requires at least 10 MLAs at the time of filing the nomination. Their name and signatures must be on the form of the candidate and it would be validated by the returning officer.

On Friday evening, JD-U had called for an emergency meeting at the Nitish Kumar’s residence where all MLAs were asked to participate.

Sources said that the MLAs have reportedly given their name and signatures on the nomination form so as to avoid any game being played by other leaders.

For the BJP, one seat is confirmed and it would manage to win another with the help of other parties.

For the RJD, it has 76 MLAs in the Bihar Assembly and it can easily obtain two seats with the help of the left parties and AIMIM.

In the seven seats of the Bihar Legislative Council which comes under Vidhan Sabha quota, similar mathematics will be applied as well.

One MLC needs the support of 34 MLAs. As the JD-U has the total 47 MLAs, including an independent and an LJP MLA, it would manage to secure only one MLC seat.

As per the current situation, the tenures of 7 MLCs will end on July 21 and all of them are from the NDA quota.

The tenures of Arjun Sahani of BJP and Mukesh Sahani, the president of VIP who was sent in Vidhan Parishad through BJP quota, are ending on July 21.

The Bihar Legislative Council has 75 seats, including 27 which come under Vidhan Sabha quota, 24 MLCs are elected through local bodies and Panchayat members, six seats under teacher quota and sixseats under graduate quota.

Besides, the governor of Bihar has the power to nominate 12 MLC.

As per the mathematics, the JD-U will bear heavy loss of four seats, while RJD has two seats (required 68 MLAs) and it would give support to either the left party or Congress through remaining eight MLAs.

The BJP is also securing two seats (required 68 MLAs) and it would also try to grab another seat with the help of parties like HAM or JD-U.

There is also a possibility of giving support to a candidate of HAM or JD-U.