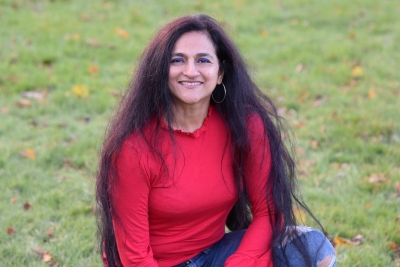 New Delhi, May 22 (Ajit Weekly News) Taking a break in a world where most of us find it difficult to slow down doesnt amount to giving up, asserts leading IPR lawyer Dahlia Sen Oberoi, who has penned a memoir, “Ashramed: From Chaos to Calm” (Hachette), that details her 30-day-long transformational sojourn in an ashram that began just before the Covid-19 pandemic forced the world into a lockdown.

“In a world where we find it difficult to slow down, it was the pandemic that forced everyone to hit pause. Fortunately, at about the same time, I had found my pause in the ashram. That, for me, was so life-altering, that I felt the need to pen down my experiences so that others could benefit from it. To say that it is okay to press pause,” Oberoi said of her debut book.

“As this pandemic has taught us, we need to be prepared for every eventuality. Through my book, I want to say that taking a break isn’t giving up. It is important to rediscover ourselves, spend time with ourselves and introspect. And not take our well-being for granted, not just mental and physical but, to make sense of the bizarre events all around us, also the emotional and the spiritual.

“If I can inspire even one person to have the courage to take a break and work on their overall well-being through yoga, or any other path, then I would have fulfilled the purpose of writing this book. ‘Ashramed’ is a call to everyone to take a chance on themselves. It is my way of telling the reader you are stronger, and braver than you think. If I can, so can you,” Oberoi added.

Till the ashram sojourn, her life had revolved around court appearances, client meetings and trotting around the globe, but found herself yearning for something more. With a lifelong passion for fitness, she discovered a yoga teacher’s training course offered by an ashram and forced herself to face the question: If not now, when?

And so she set off on her quest to move away from her uncompromising life as a lawyer and find some calm. Living sans her precious laptop, attending lectures on the Gita, learning and perfecting new asanas, and spending her days washing utensils and cleaning dormitories, was at first a struggle. But gradually, her self-doubt and restlessness washed away.

A gold medalist from Delhi University, Oberoi has long been an important part of the publishing world, legally assessing manuscripts, fighting piracy and court cases for the industry. Comfortably wearing many caps at once, she is also a dancer, a poet, a songwriter, a scriptwriter for screenplays, a university lecturer and now, a yoga teacher. She is also the creator of DahliaNritYog, an amalgamation of Yoga and Kathak as a path to wellness.

Announcing the publication, Hachette India Managing Director Thomas Abraham said: “I’m delighted that Dahlia, who I’ve seen as a top notch IP lawyer, has revealed this other side of her and chosen us to be her Publishers. The book is quintessential Dahlia – at once provocative, humorous and insightful.

“Her journey towards balance and calm from the forefront of a successful and stressful professional career is inspiring, will enable similar transformative journeys in others and help them get ‘ashramed’ too.”

“From introspections on human relationships to discussions on religious scriptures, from incisive questions about feminism to existential crises,” the book is “a delightful must-read for all”, said Justice Prathiba M. Singh, a Judge of the Delhi High Court who has significantly contributed to academic literature and legal developments in India’s IP law.