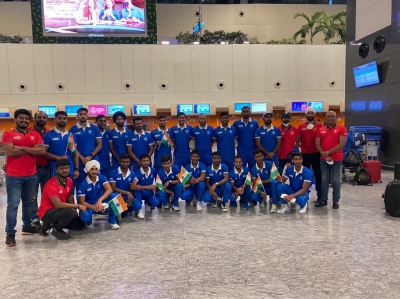 Jakarta, May 22 (Ajit Weekly News) Defending champions India will open their campaign in Asia Cup hockey in a high-octane clash against arch-rivals Pakistan on Monday at the GBK Arena, the same venue as the Asian Games Jakarta in 2018.

The opening day will also witness Malaysia take on Oman, who are riding on the success of their Asian Games Qualifier in Thailand a fortnight ago, while Asian Champions Trophy title holders South Korea will play Bangladesh in Pool B matches. Japan, who are also the reigning Asian Games champions, will take on hosts Indonesia.

In the previous edition of the continental tournament, which is also the World Cup qualifier, India had defeated Malaysia 2-1 in the final held in Dhaka. India and Pakistan have won the tournament three times each, while South Korea is the most successful team, having clinched the title four times in 10 previous editions.

India have named a young team with experienced Birendra Lakra as their skipper, and SV Sunil as vice-captain, while star performer at the Tokyo Olympic Games, Simranjeet Singh, makes a comeback after a long injury lay-off. The team will be guided by two-time Olympian and former captain Sardar Singh as their coach.

Speaking on the eve of their clash against Pakistan, Lakra and Sunil stressed on the need to guide the youngsters in the high-pressure game. “Pressure is always there (against Pakistan). Any match against Pakistan is always high-voltage. As seniors we can’t be too excited as then the junior players will come under pressure. So, we need to take it as a normal match,” said Sunil.

Lakra added, “Both the teams are young. For us, it is important to go match by match. If the performance is good, result will definitely come. If we perform well, the confidence level will be high.”

Emphasising on how all teams are on par with each other, and on a good day, anyone can upset any team, Sunil said, “No team can be taken lightly. Everyone is here to earn a place in the World Cup next year and as defending champions our focus will be on putting up our best show.”