If batters did well, then bowlers were off the radar: Rohit Sharma rues lack of team effort 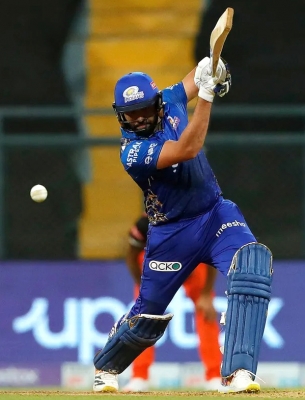 Mumbai, May 22 (Ajit Weekly News) Mumbai Indians skipper Rohit Sharma has rued the fact that during the IPL 2022 season, the side “didn’t come together as a group performing”, though he added that the second half of tournament was far better than the first for the five-time champions.

Mumbai, after being eliminated quite early in the tournament, ended their campaign on a high, defeating Delhi Capitals by five wickets at the Wankhede Stadium on Saturday night. While it was an inconsequential match for Mumbai, it was a do-or-die game for the Rishabh Pant-led Delhi, whose qualification for playoffs rested on them defeating the five-time IPL champions.

DC suffered a heart-break, and Royal Challengers Bangalore made it to the playoffs, joining Gujarat Titans, Rajasthan Royals and Lucknow Super Giants.

Post the victory over DC, Rohit Sharma summed up the failed Mumbai Indians campaign this season, saying, “There are a lot of things (which didn’t go the team’s way). It’s the collective performance that gets you through and that was something that was missing. We didn’t come together as a group performing. Some days it was the bowling unit who was doing pretty well and the batters didn’t cash in.

“If batters did well, then bowlers were off the radar a little bit. That was happening throughout the season. When you want to win games, tournaments, qualifications and all of those, you have to perform in all three departments. That’s something we missed in the first half but the second half was brilliant. Yes it was a bit too late, but at least we can take something from this tournament,” added Sharma.

The India all-format skipper, who might be rested for the T20I series against South Africa beginning June 9, added that there was huge motivation before the game against DC on Saturday as the side wanted to “finish on a high”.

“I said it at the toss as well; we were here to win the (last) game. I know a couple of teams (RCB) were watching us keenly but for us it was important to get what we wanted to get out of this game, to make sure that we finish on a high and to take some positives from this last game and try to see where we didn’t do well this season and try to correct those mistakes.

“Once we lost eight (matches) on the trot, it was tough. It’s never easy when you lose games like that. All we wanted to do was to just come out and see where we made mistakes and try to rectify those mistakes. I thought we did pretty much well in the second half of the tournament.

“So a lot of positives came out of the second half, something we can pride ourselves in. We just wanted to finish on a high. When they (DC) got to 160, I was a little nervous because it was not a 160 pitch. There was a lot of help for the bowlers, as we saw in the first innings when we were bowling. It was a slowish kind of a pitch and got sluggish toward the end as well.

“It wasn’t coming onto the bat. When you restrict a team to 150-160, it’s about one good partnership and then you’re in the game. That’s what happened with Ishan (Kishan) and (Dewald) Brevis. They got that crucial partnership and got us in a good situation.