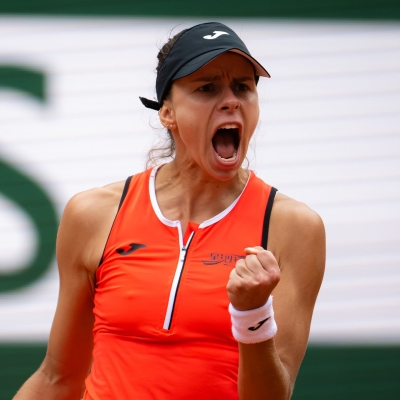 World No 56 Linette was only 2-16 against Top 10 opponents coming into the match, and she had lost to Jabeur in the Roland Garros third round last year. But this time, Linette pulled off a comeback against Jabeur, who won the WTA 1000 Madrid title earlier this month.

Both of Linette’s previous Top 10 wins also came at Grand Slam events (including over the then-World No 1 Ashleigh Barty at last year’s Roland Garros via retirement), and she grabbed another upset at a major after 2 hours and 28 minutes of play.

Jabeur had won 17 matches on clay this season, far ahead of everyone else on tour (Amanda Anisimova and Ekaterina Alexandrova are tied for second place with 10 clay-court match-wins apiece in 2022). Along with her Madrid title, Jabeur reached finals in Charleston and Rome.

Linette, though, came through in a tricky final set, garnering her second win over Jabeur in their five career meetings. Jabeur had 35 winners to Linette’s 32, but the unseeded Pole kept her unforced errors lower, with 35 to Jabeur’s 47.

Jabeur broke Linette three times in the first set but missed opportunities to take a lead in the second set, where the Tunisian went 0-for-4 on break points. Linette used her court craft to draw errors from Jabeur late in the second-set tiebreak and squeak out the set.

Rain began to fall as the pair exchanged breaks during the third set, and a love hold for 6-5 put Linette in charge down the stretch. Jabeur saw a 40-0 lead slip away in the following game, and Linette eventually broke for the upset after a forehand miscue by the World No.6.