French Open: Dominic Thiem knocked out in first round 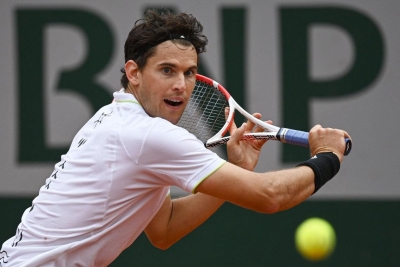 Paris, May 22 (Ajit Weekly News) Two-time French Open finalist Dominic Thiem crashed out of the tournament in the first round at Roland Garros after losing to Bolivian world number 87 Hugo Dellien here on Sunday.

Dellien broke Thiem four times to register an impressive 6-3, 6-2, 6-4 victory in a two-hour and one-minute clash at Court Simonne Mathieu, capitalising on a below-par performance from the former World No 3 to advance to the second round at the clay-court Grand Slam for the second time.

Although Thiem’s rustiness was evident in just his sixth match of 2022 since returning from a right wrist injury suffered last June, Dellien was inspired in the pair’s first tour-level meeting. The Bolivian’s effortless movement around the court and high-class ball striking made life difficult for Thiem from the opening game as Dellien surged to a fifth tour-level victory of the year.

Thiem showed signs of his best with some trademark cleanly struck backhand winners, but the Austrian struggled for consistency throughout. Dellien let slip a breakpoint in Thiem’s opening service game of the match as the Austrian held for 1-1, but the Bolivian remained aggressive, keeping the Thiem serve under constant pressure and cleverly using his drop shot to pull the 2020 US Open champion around the court.

The win continues a solid 2022 for Dellien on the clay. The Bolivian won an ATP Challenger Tour event in Santiago on the surface in March and he also reached the second round after qualifying at the ATP Tour events in Barcelona and Estoril in April.

His second-round opponent in Paris will be Portuguese qualifier Nuno Borges or 21st seed Karen Khachanov.

The 28-year-old Thiem, who played in two straight finals, four straight semi-finals and five straight quarter-finals at Roland Garros from 2016 through 2020, is still seeking a maiden win in 2022 since returning from a right wrist injury suffered last June.