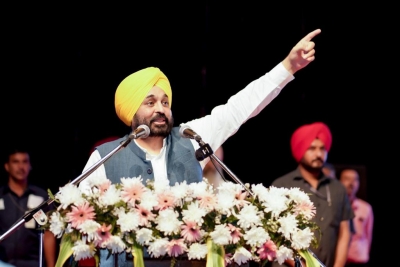 Chandigarh, May 22 (Ajit Weekly News) With a view to transforming the destiny of the state’s farmers, Punjab Chief Minister Bhagwant Mann on Sunday reiterated his government’s firm commitment to make agriculture an economically viable and profitable profession so as to motivate youngsters to opt their ancestral occupation with pride and dignity.

Paying glowing tributes to the farmers from Punjab and Haryana who lost their lives during farmers’ agitation and martyrs of Galwan Valley here, Mann, in the presence of AAP national convener and Delhi Chief Minister Arvind Kejriwal and Telangana Chief Minister K. Chandrashekar Rao, said this function organised to honour the families of valiant soldiers and farmers reflects “our deep reverence and commitment for the adage Jai Jawan, Jai Kisan”.

KCR, as the Telangana Chief Minister is popularly known, especially joined his counterparts from Punjab and Delhi, to honour the families of farmers and the martyrs of Galwan Valley on the occasion to give financial assistance of Rs 3 lakh and Rs 10 lakh each, respectively, as a humble tribute on the behalf of the people of Telangana.

Taking a dig at the “apathetic attitude of previous governments those blatantly ignored the farming sector for their myopic outlook”, Mann said it is really ironical that a farmer who owns the most fertile land with the highest yield, as compared to any other part of the country and even across the globe, was living in penury and struggling to get two square meals a day.

On the contrary, his peers on foreign shores owning land with least fertility due to harsh climatic conditions are leading an affluent life, he added.

Mann questioned the earlier leadership which ruled Punjab for several decades together. “Why they could not implement farmer-friendly initiatives for the welfare and prosperity of farmers who were virtually pushed in debt trap due to meagre income from farming coupled with low yield and high prices of inputs thus making this occupation absolutely non-profitable.”

Paying homage to the martyr soldiers and farmers who lost their lives during farm agitation, Kejriwal said as Delhi model of school education, health infrastructure, mohalla clinics and uninterrupted electricity at affordable rates have now emerged as world acclaimed models of development, for any state or country.

Similarly, he said undoubtedly Punjab would “soon become a frontrunner state to come up with unique agriculture model based on advanced farming practices to boost farmers’ income with a thrust on crop diversification under the visionary leadership of Bhagwant Mann with his background as farmer and he has already made a modest beginning by taking few pro-farmer steps in agriculture sector to propel it in the high growth trajectory”.

KCR said it was a commitment of his government to extend a helping hand towards these families in their hour of grief.

He lamented that he should have come much earlier for this noble cause but somehow this couldn’t materialise due to the model code of conduct in Punjab during the Assembly election process.

Exhorting the farmers to resume their agitation for all the demands, including MSP on all crops with constitutional guarantee from the Centre, Rao said now this struggle should not be only restricted to states of Punjab, Haryana and western Uttar Pradesh, and rather all the farmers from other states should proactively come forward for getting their genuine demands accepted from the Centre.

He also briefly highlighted the significant initiatives taken by his government for the promotion of crop diversification, free electricity in the farm sector and overall development of farmers, besides ensuring 24×7 power for all categories of consumers since his state was created in 2014 under his reign.

Rao categorically opposed the Centre’s move to install electricity meters in the farm sector saying: “We have already passed a resolution in the state Assembly that the Telangana government will not go for this in the larger interest of the farming community.”