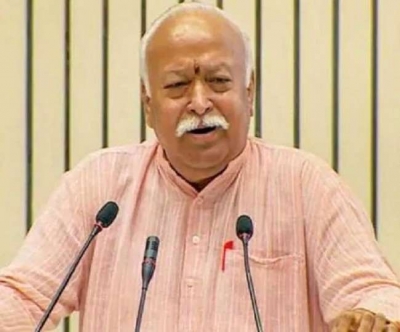 By Santosh Kumar Pathak
New Delhi, May 22 (Ajit Weekly News) The BJP and the RSS’ eyes are on the court verdicts in the Gyanvapi mosque and Shri Krishna Janambhoomi-Shahi Idgaah cases.

As the BJP and the RSS had run a nationwide campaign during the Ramjanambhoomi movement and held agitations, people especially Hindus and Muslims are awaiting their moves in these cases.

In November 2019, the Supreme Court had announced its verdict in the Ayodhya dispute case. At that time when RSS chief Mohan Bhagwat was asked about Mathura and Kashi, Bhagwat had said that the RSS was associated with the Ramjanambhoomi movement for historical reasons and it was an exception.

Bhagwat had said that now the RSS will work for human development. However, it cannot keep mum on important issue like Gyanvapi which is associated with Indian culture.

Addressing an event organised in the national capital on Wednesday, Akhil Bharatiya Prachar Pramukh, Sunil Ambekar said: “There are a few facts which are coming to the fore about Gyanvapi. I am of the view that truth cannot be hidden under any circumstances. How long can you hide it. Historical truth should be put in the right perspective before the society.”

It is clear that the Sangh is supporting the campaign to bring out the truth about Gyanvapi but it is also being said that right now the RSS will not initiate any campaign or agitation on the issue.

During the same event, BJP Lok Sabha MP and cabinet minister in the Narendra Modi government Sanjiv Baliyan said that a Shivling was purportedly found during the survey of the Gyanvapi mosque.

On the BJP’s strategy for Gyanvapi, party national spokesperson Prem Shukla said Ayodhya, Mathura and Kashi have been on the agenda of the Vishwa Hindu Parishad. During the Palampur convention in 1989, the BJP had openly announced support for the Ramjanambhoomi campaign.

The other two issues are of the VHP and it has to decide what it wants to do.

He said the matter is in court which will give its verdict.

To know the BJP’s stand on Gyanvapi and Mathura, Ajit Weekly News spoke to Union Minister of State, Ministry of Development of North Eastern Region & Ministry of Cooperation B L Verma, who said the manner in which the Shivling and other signs of Hindu culture have been found there (Gyanvapi), says it all.

We all know that our country was ruled by the Mughals for a long time. Invaders like Babar came here who tried to erase our culture and demolished the temples which include Ayodhya and Kashi, Verma claimed.

When asked what will the BJP do, Verma said: “The truth has come out. The matter is in court and we hope that the verdict will be positive in this too. We will wait and respect the court’s verdict.”

If sources are to be believed, although BJP leaders, MPs, MLAs are going overboard in giving statements on the issues, the party and the Union government have full faith in the court’s verdict.

The VHP, an affiliate of the RSS, had played the main role in the Ramjanambhoomi movement and that’s why all eyes are now on the organisation.

It is being said that the VHP will initiate a campaign for the two (Gyanvapi and Mathura). However, what sort of a campaign will it be, what will be its format and area, what will be its demands — the organisation will take a decision on all these questions in forthcoming meetings.

Talking to Ajit Weekly News, VHP president Alok Kumar said the board of trustees will meet in Kanchi this month end while on June 11 and 12, in the board meeting in Haridwar and on the instructions and guidelines of the sants, the organisation will take a stand and decide the future course of action.

However, Alok Kumar demanded that the places of worship Act should be reconsidered as it was made in 1991 in a hurry. Neither was it discussed in the society nor was it sent to the Parliamentary select committee. At that time, the BJP had opposed it.

Talking about the plea for changing the legality of the said law in the Supreme Court, Alok Kumar said this law can be reconsidered.