Behrendorff and Chris Green to join Middlesex for T20 Blast 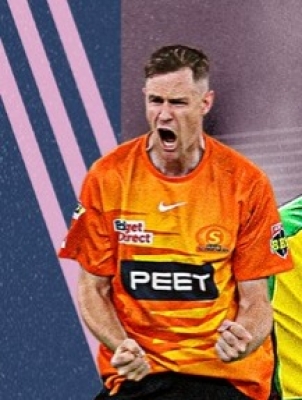 London, May 22 (Ajit Weekly News) Middlesex have signed Australian pair Jason Behrendorff and Chris Green for this season’s T20 Blast competition, the club confirmed in a statement on Sunday.

The 32-year-old left-arm paceman Behrendorff, who is playing in the Indian Premier League, will arrive at Lord’s once his commitments with Royal Challengers Bangalore end this month. He replaces fast bowler Shaheen Shah Afridi, who will not be returning to the club after Pakistan’s series against West Indies.

Green, 28, played for Middlesex last season and will come in for Afghanistan spinner Mujeeb Ur Rahman in early June.

The Australian has 21 white-ball caps for his country, having played in twelve ODI’s and 9 T20s, and he brings a wealth of domestic T20 experience to Middlesex, having reached the final of the Big Bash League five times with Perth Scorchers — lifting the title on three occasions, in 2014, 2015 and most recently earlier this year.

Chris Green will join up with Middlesex in early June as a replacement for Afghanistan spinner Mujeeb Ur Rahman, who the Club can confirm will start Middlesex’s Blast campaign at the end of May, but will leave on international duty with his country, who play Zimbabwe in a three-match ODI series.

Upon completion of Afghanistan’s ODI series, Mujeeb will return to Middlesex for the remainder of the Club’s Blast campaign, including the knockout stages should Middlesex qualify.

Australian Green, 28, was impressed with both bat and ball for Middlesex in last summer’s Blast campaign, playing in seven of the Club’s South Group matches, and like Behrendorff has also tasted success in the Big Bash League, winning the title with Sydney Thunder in 2017.

Speaking of the addition of Behrendorff and Green to Middlesex’s Vitality Blast ranks, Alan Coleman, Head of Men’s Performance Cricket, said, “We have added Jason and Chris to our T20 squad for the forthcoming Blast campaign. With Shaheen heavily committed to international duty with Pakistan, we needed to bring a quality seamer into the attack for our Blast campaign, and in Jason, we have a left-arm seamer of proven international class.”

“With Mujeeb also leaving on international duty, we were keen to ensure that we were covered in the spin department, and we all know what Greeny is capable of in the short form of the game. He fit in brilliantly last summer and can play a match-winning role for us, so we’re really looking forward to welcoming him back into the dressing room.”