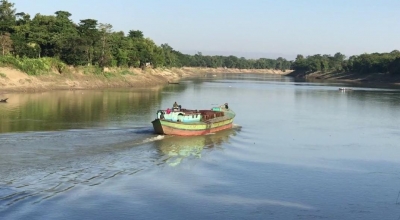 Guwahati, May 22 (Ajit Weekly News) A group of people from Bangladesh allegedly tried to enter India by crossing the Kushiyara river on a boat in South Assam’s Karimganj district. However, the “alert” local residents claimed that they foiled the infiltration attempt.

India and Bangladesh share the trans-boundary water of Kushiyara, with the Indian riverside without any fencing in many places alongside the land border.

The SP of Karimganj district said, “We have taken the matter with the BSF. I also visited the spot and spoke with the residents there. A few locals had claimed that they have seen a boat carrying a group of twenty people trying to enter from the Bangladesh side. The locals raised an alarm and lit torches following which the boat turned back. We are still investigating the matter.”

The IG of Mizoram and Cachar Frontier of BSF, Mridul Sonowal informed that they took note of the incident. He said, “We have camps in that area. Though the guards patrol there regularly, we have stepped up the vigil further following that incident.”

There are different opinions behind the alleged incident which took place on Friday night. Some locals are saying that the Bangladeshis planned to cross the riverine border side with the motive of committing theft and dacoity.

The police and BSF authorities refused to comment on this claim.