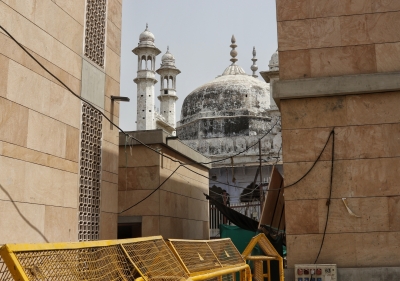 Lucknow, May 22 (Ajit Weekly News) Having realised the ‘power of Hindu vote’ in elections in India after 2014, the Gyanvapi mosque controversy has put the opposition parties in a Catch 22 situation.

The opposition parties, particularly those in Uttar Pradesh, are unable to take a stand on the issue. If they back the Hindu petitioners, they will lose out on Muslim support, and if they side with the Muslims, they will be dubbed as ‘anti-Hindu’.

The Samajwadi Party, which is the main opposition party in Uttar Pradesh, has avoided taking a clear stand on the controversy though Akhilesh Yadav has been accusing the BJP of stoking communal issues for electoral gains.

Akhilesh Yadav recently made a remark about the tendency among Hindus to place a stone and start worshiping it, and the entire BJP workforce came down on him accusing him of insulting the Hindu religion.

The inherent power of such allegations has forced Akhilesh Yadav to beat a hasty retreat.

The Samajwadi Party chief realises that for his political survival, he needs the support of Muslims as well as Hindus, and taking a side on the Gyanvapi row will pit him against one community.

None of the top SP leaders, barring Muslim MPs like Shafiqur Rehman Barq and S.T. Hasan, have voiced their opinion on the issue.

The Congress, too, has maintained a studied silence on the issue and its leaders, who often go overboard in announcing their opinion on such issues, have also remained quiet this time.

Acharya Pramod Krishnam, known to be playing a proactive role in the party these days, however, went a step ahead and advised Muslims to hand over the Taj Mahal and Qutub Minar to Hindus.

His statement earned him considerable flak within the party’s WhatsApp groups and stunned him into silence.

The Bahujan Samaj Party has also not gone beyond issuing a customary statement criticising the BJP for disturbing communal harmony in the country.

What is politically significant in the situation is the silence of BJP’s allies who have, so far, refused to be drawn into the controversy.

The Suheldev Bhartiya Samaj Party and the Apna Dal have not issued any statement on the Gyanvapi issue, which indicates that they are playing it safe on the issue and also do not wish to upset their caste equations with the minorities.