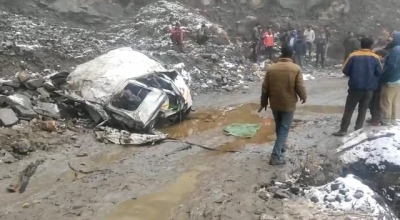 Jammu, May 22 (Ajit Weekly News) Two persons, including a child, were killed and seven others injured in a road accident in J&K’s Ramban district on Sunday, police said.

Police said that the accident occurred when a car rolled down a gorge in Batote area of Ramban after the driver lost control on the wheel.

“Two persons were killed in this accident and 7 injured.

“Bodies of the two deceased have been recovered from the accident site and the injured shifted to hospital,” a police official said.

The deceased have been identified as Sara Begum, 51 and Aeet, 10, the official added.