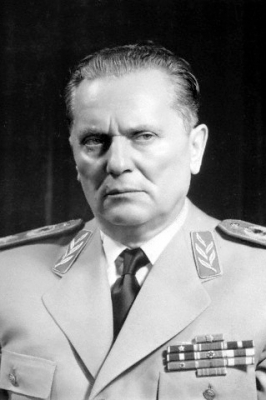 Kumrovec, May 22 (Ajit Weekly News) The 130th birthday of Yugoslavia leader Josip Broz Tito was celebrated at his hometown in Croatia, as thousands of people from across Croatia as well as Slovenia, Bosnia and Herzegovina, Serbia and other former Yugoslavian states arrived here for this gathering.

Many people wore T-shirts, badges with Tito’s pictures, as well as Yugoslavian hats with red stars, and waved flags with Tito’s name on them. In addition to speeches by Croatian and former Yugoslavian figures, songs and dances of Yugoslavian times were also performed to the crowds.

“Tito was and remains a symbol of persistence, principality, determination, courage and vision,” said former Croatian President Stjepan Mesic, who was among the speakers addressing the gathering.

The presence of so many people on this occasion proves how much significance Tito means not only for Croatia, but also for the whole former Yugoslavia, as well as the whole world, Robert Splajt, Mayor of Kumrovec, said.

Olga Vodusek from neighbouring Slovenia said he has been visiting here each year on this occasion, except that was interrupted by the Covid-19 pandemic.

“We are arriving here because this is the place where we can recall the good times when we all lived together, when we were richer and safer, in our common country that was socialist and democratic,” he told Xinhua, lamenting the dissolved Yugoslavia as “a mistake”.

The celebration was organised by the Croatian Anti-Fascist Alliance, Krapina-Zagorje County and Kumrovec Municipality.

Tito was born in Kumrovec in May 1892 and he had been the leader of Yugoslavia until he passed away in May 1980.