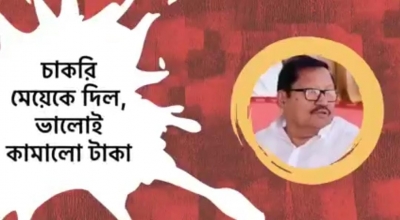 Kolkata, May 21 (Ajit Weekly News) At a time when the ruling Trinamool Congress in West Bengal is having a tough time over the ongoing CBI probe into the irregularities in recruitment by the West Bengal School Service Commission (WBSSC), an innovative parody video released by CPI(M)’s youth wing, the Democratic Youth Federation of India (DYFI), has rubbed salt in the wound.

Taking cue from the hit Bengali song ‘Basanta Eshe Geche’ (the spring has arrived) from the film ‘Chotushkone’, DYFI’s parody video, which has a mix of satire and pain, depicts the nitty-gritty of the scam in a musical mood.

The opening lines of the parody video, ‘Paresh to feshe geche, Parthoo teshe geche’ (Paresh is in the soup and Partha too is finished), clearly target Minister of State for Education, Paresh Chandra Adhikari, and former Education Minister, Partha Chatterjee, both of whom are being grilled by CBI sleuths in connection with the recruitment scam.

In the video, the composer has detailed the hide-and-seek episode that Adhikari played with the CBI for around 48 hours before finally landing at the agency’s office in Kolkata on Thursday evening.

Without making a direct reference to Chief Minister Mamata Banerjee, the parody video indirectly targets her as it refers to the old Bengali saying, ‘Kan tanle matha ashe’ (the head is revealed when the ear is pulled). The video also hints at possible last-moment Centre-state understanding to manage the CBI probe in the matter.

While this is the satire part of the parody video, it also contains some pictographic and musical references to those agitating after being deprived of jobs despite figuring in the merit list to allegedly make rooms for out-of-turn candidates like Adhikari’s daughter, Ankita Adhikari.

The parody video contains a number of pictographic representations of police action against the agitators.

The state secretariat member of DYFI in West Bengal, Kalatan Dasgupta, told Ajit Weekly News that this video has been released and is being circulated widely on social media platforms, not only by DYFI activists, but also by many who had been deprived of jobs.

“In the coming days, DYFI will be hitting the streets in a major way to organise a mass movement on this scam and in all our programmes the video will be played,” Dasgupta said.