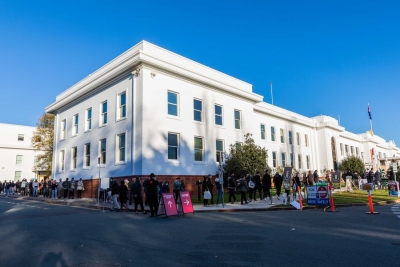 Canberra, May 21 (Ajit Weekly News) Shortly after polling ended, vote count started on Saturday for the tightly-contested Australian general election, the first one to be held since 2019.

Due to time difference, however, as votes are being counted across most of the country, people are still casting their ballots in some other areas including Western Australia, reports Xinhua news agency.

In his final pitch to voters on Saturday, Prime Minister Scott Morrison who cast his ballot in his electorate of Cook, said “today Australians are making a big choice about their future”.

“I want the aspirations of Australians to be realized and the way that occurs is by backing Australians in, not telling them how to live and what to do, and getting government in their face.”

His main rival, Labor leader Anthony Albanese, who voted in his electorate of Grayndler, said: “My big concern with this government is, what is there to be proud of?

Results are expected to be declared within hours.

However, the Australian Electoral Commission has warned that it could take longer to declare results in close contests due to the record high number of postal votes.

If a result is called on Saturday night, the leader of the losing party will traditionally call their opponent to concede before speaking publicly at their respective election night events.

Voting started at 8 a.m. on Saturday morning across 7,000 polling stations.

In order to form a majority government, either the Coalition or the Labor must win at least 76 out of 151 seats in the lower house of Parliament — the House of Representatives.

Morrison and Albanese were tied in their personal battle, with 42 per cent of respondents picking each as their preferred Prime Minister.

The poll found that 36 per cent of voters intend to vote for the Labor as their first preference and 35 percent for the Coalition.

If neither the Labor nor the Coalition wins enough seats to form a clear majority, the election result will be declared a “hung parliament”.

In that case, both Morrison and Albanese will enter negotiations with minor parties and independent MPs seeking their support to form a minority government as the Labor did in 2010.

Some of the key issues for voters include economy, unemployment, climate change, trust in leaders, healthcare and education.

Morrison, who became Prime Minister in 2018, is the first Australian leader to serve a full term in office since John Howard, who won four elections before losing to Labor’s Kevin Rudd in 2007, according to a BBC report.

He has led Australia through a period dominated by natural disasters and the Covid-19 pandemic, which was initially hailed as a success but was later criticised for inadequate planning.

Meanwhile, Albanese, one of Australia’s longest-serving politicians who was briefly Deputy Prime Minister under Kevin Rudd in 2013, is campaigning for change and has promised voters a “safe change”.